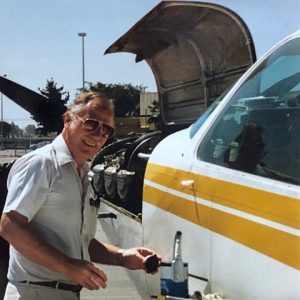 UW ECE Professor Emeritus Robert (Bob) Albrecht was known for his long-standing commitment to higher education and his love of flying. He is shown here standing next to a Beechcraft Bonanza he piloted as a member of the Lynn Air Flying Club. 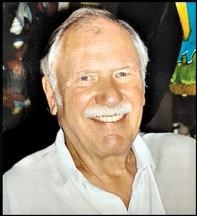 Albrecht joined the UW in 1961, as a professor of nuclear and electrical engineering. In 1984, the Nuclear Engineering Department was dissolved, and Albrecht’s focus shifted to teaching electrical engineering full-time. In 1989, he became the Associate Chair of Research and Development in the UW Department of Electrical Engineering (UW EE). During his 40-year career, Albrecht mentored many graduate students, taught classes at all levels, and consulted at nuclear plants and research facilities around the world. In his last decade teaching at the UW, he created an autonomous robotics lab to do early work on mobile robotic control, navigation and integration of artificial intelligence. He was known for being visionary, bold, frank and straightforward.

“One of Bob’s mobile robots was recruited to lead a UW ECE graduation ceremony in Husky stadium back in the 1990s, and one of his robots also brought out the ball for the first pitch at a Husky baseball game,” UW ECE Professor Bruce Darling said. “I was so sorry to hear about Bob’s passing. It’s more than just losing a friend and colleague; it feels like losing an institution.” 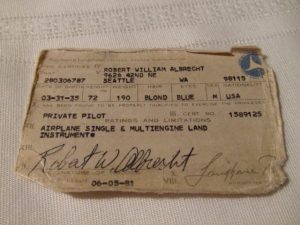 A photo of Albrecht’s pilot license. Albrecht always carried it with him in his wallet, even after having to give up flying because of health reasons.

“Bob used to push for us to pursue telepresence as the next big research area for electrical engineering. Most faculty members groaned in response. But Bob was prescient,” UW ECE Professor Les Atlas recalled. “His examples of telepresence anticipated teleconferencing, which is an integral part of our lives now.”

“I was always impressed (and a bit intimidated) by the breath of his knowledge and also his curiosity,” said UW Mechanical Engineering Professor Emeritus Norman McCormick. “He was a practical engineer-scientist-educator who thought both inside and outside the box, all the while injecting a little humor when possible.”

A love for engineering, and for flying 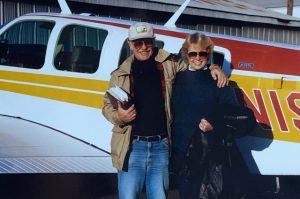 Albrecht often took graduate students and colleagues on sightseeing flights. He is shown here next to his wife, Mary, in front of the Beechcraft Bonanza he flew.

Albrecht’s long career at the UW demonstrated his passion for engineering, and he loved to fly. In fact, he fell in love with his wife while both were working at Boeing the summer before they graduated with their Bachelor of Science degrees in engineering from Purdue University in 1957. That summer, Albrecht also had the opportunity to work in flight-testing for the Boeing 367-80 jet aircraft. After earning his Master of Science and doctoral degrees in nuclear engineering from the University of Michigan in 1958 and 1961, he earned his private pilot license and flew whenever he had a chance.

“One thing that Dad’s colleagues will remember about him is his love of flying,” Albrecht’s daughter Liz Behlke said. “He often would fly graduate students out to see the Hanford Site or take visiting colleagues on sightseeing trips around the Puget Sound.”

Albrecht enjoyed flying Beechcraft Bonanzas as a member of the Lynn Air Flying Club for many years. He continued to carry his pilot’s license in his wallet long after his medical condition forced him to give up flying.

A lifelong support for education 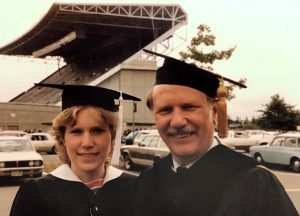 Albrecht and his daughter, Liz Behlke, at her graduation from the UW.

Albrecht was known to have had an unflagging support for higher education and for being an optimistic, engaging storyteller with a big heart. He remained intellectually active after retiring in 2001, establishing the Wednesday Lunch Bunch (WLB), which welcomed retired UW faculty and all-comers for weekly discussions and camaraderie at the University of Washington Club. He presided over these lunches for 20 years, with a sense of humor, as the self-appointed “Grand Poobah.” He also wrote and published a book, “Introduction to the Beauty of Calculus,” at the age of 81. His friends and colleagues remember him as someone who was always intellectually sharp, well-read and never afraid to engage in a friendly debate.

“Bob was a well-respected member of UW ECE, and he was well-loved by many in our community,” said UW ECE Professor and Chair Eric Klavins. 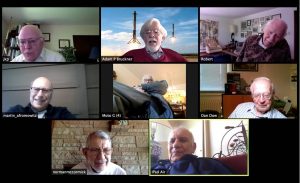 The Wednesday Lunch Bunch (WLB), which welcomed all-comers for weekly discussions and camaraderie at the University of Washington Club. After he retired, Albrecht presided over these lunches for 20 years, as the self-appointed “Grand Poobah.”

“He had one of the most inquiring and original minds I have ever encountered, and he was a nice guy to boot — always courteous and appreciative of others,” said Charles Sleicher, Professor Emeritus and former Chair of UW Chemical Engineering.

Albrecht was a person unafraid of new, big ideas. His hopeful vision of the future encompassed forward-thinking technologies and his legacy continues today in the lives of those he touched, both nearby and far away.

“I was personally inspired by Bob and challenged to make new things happen in the future,” Atlas said. “As I think about it, that’s likely why I pursued certain research projects, which over time ended up as what are now my most-cited papers.” 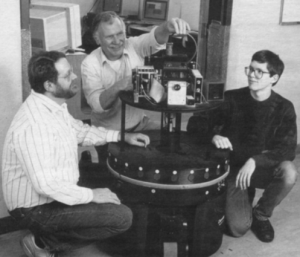 Albrecht (center) with two students, next to “Miss Marple,” a mobile robot designed and engineered in 1992.

“He introduced me to the idea of mobile robotics in the courses I took from him in the early 1990s,” said Jesus Savage, one of Albrecht’s former graduate students. “This gave me a foundation for the work I currently do as a robotics professor at the School of Engineering of the National Autonomous University of Mexico. I’m very grateful for this knowledge.”

Albrecht is survived by his wife, Mary; his son, Robert Albrecht Jr., with daughters Renee and Amelia; and his daughter, Liz Behlke with her daughter Aurora.

The Albrecht family will hold a memorial service at a later date. Sympathy cards, gifts and well-wishes to the family can be sent care of Bruce Darling.