Adapted from an ARUW announcement 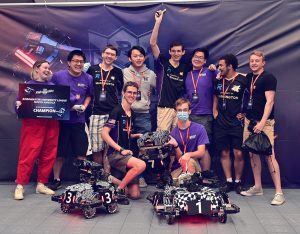 RoboMaster is an annual intercollegiate robotic competition and academic exchange founded and hosted by Da-Jiang Innovations. The program began in 2013 as a small-scale internal competition held inside DJI’s headquarters, but it has grown exponentially since then and now encompasses worldwide robotics competitions for university students, K–12 students and the general public.

ARUW is a 50-person team representing students from various academic backgrounds at the University ranging from the sciences, math and engineering to humanities and the arts. In past years, the team has competed in the global RoboMaster competition in Shenzhen, China, but in light of COVID-19 travel restrictions, teams from American, Mexican and Canadian universities came together this year to hold the first dedicated North American regional competition at Texas A&M University. ARUW sent 10 people to the competition to participate in-person.

The traveling team was led by UW Mechanical Engineering graduate Sig Johnson and included UW ECE undergraduate students Winston Chen and Kevin Egedy. UW ME undergraduates Noah Miller and Derek Wang piloted ARUW’s robots in the competition, and the team earned a spot against Virginia Tech in the finals, which were held on June 21. ARUW took home the prize after winning a five-game series.

“Competing with ARUW is unlike anything else. It is a thrilling experience to put all your hard work on the line,” Egedy said. “I’m looking forward to another year and bringing home next year’s trophy.”

“I became part of ARUW in my freshman year. It’s a very vibrant community where you can not only develop technical skills but also make friends,” Chen said. “The experience of the North America Regional Competition was phenomenal, and I’m extremely proud of my team for winning this championship.”

How the competition works 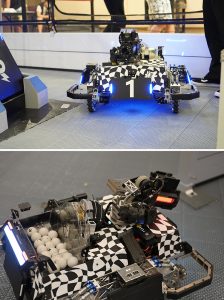 Each university team designed and built three robots to battle it out in the competition. Shown here from two different angles is the “Hero” robot, which is capable of launching 42mm, golf-ball sized, projectiles at its opponents.

Each year, ARUW designs and builds a team of seven robots for the competition. Every robot serves a unique purpose at the annual event, which is formatted in a manner similar to a video game or “capture the flag.” Teams of robots battle for supremacy, launching projectiles at each other. Each robot has pressure-sensitive plates built into it that can detect when it’s been hit and lower the device’s “health score” in the match accordingly. For this competition, only three of the robots were fielded because of time and work constraints the North American teams faced.

The primary robot for every team is called the “Standard,” and this robot is able to launch 17mm projectiles in order to hit robots on an opposing team. A strong Standard robot is critical to game play. Every team also constructed a second, attacking robot called the “Hero,” which is able to launch 42mm, or golf-ball sized, projectiles. Each of these projectiles is able to deal a large amount of damage to enemy robots in comparison to projectiles launched by the Standard; however, building an effective Hero robot is considered a difficult engineering problem for team members to solve. The third robot fielded at the competition is known as the “Sentry.” This robot is completely autonomous, meaning that it does not have a human pilot during the matches. The Sentry presents the toughest engineering challenge for the teams, as it must be able to move on a rail, detect enemy robots and accurately aim projectiles at the same time, without any assistance. The main purpose of the Sentry is to guard the team’s base, a large outpost on either side of the field with pressure-sensitive plates. The opposing team is unable to damage the base until they have disabled the Sentry robot.

The human pilots of the Standard and Hero robots view the field on a screen, much as one would in a video game, but through a first-person perspective camera mounted to the top of each robot. During the match, the pilots are unable to see the field apart from their viewpoints on the robots. Working together, the two pilots have to strategize the best way to disable adversarial robots and conquer the opposing team’s base in order to win.

“ARUW is ecstatic about this victory. It came at the end of a hard season overcoming the pandemic, remote work and all the other unique challenges presented in the past year,” said ARUW Vice President Emelia Hughes. “We’re very proud of all our members for the hard work they put in, and we look forward to seeing what great things the team and its members will achieve in the coming years.”

Learn more about Advanced Robotics at the University of Washington (ARUW) on their website.