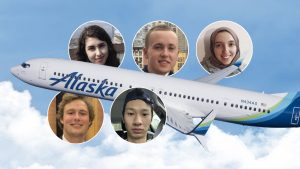 UW ECE undergraduates (from top, left to right) Shahrzad Feghhi, Grant Neuman, Batina Shikhalieva, James Mann and Parsons Cai developed the Aircraft Software Configuration Tool (ASCT) for Alaska Airlines. The ASCT is a reliable and easy-to-use web portal, which acts as a manual to help technicians load computer software onto airplanes more efficiently. The ASCT proved to be so accurate, dependable and efficient that Alaska Airlines officially adopted the tool and will be implementing it across their entire fleet this year.

When stepping into an airplane to go on vacation, visit a loved one or take a business trip, most people don’t think much, if at all, about the mechanics involved with keeping the plane running smoothly. However, what’s “under the hood” is crucial to getting people where they want to go. Today’s aircraft are filled with a wide array of computer systems critical to helping planes take off, land and reach their destinations safely. To run properly, these systems need continual, customized maintenance and updating, which can be a laborious, time-intensive process for airline personnel.

Recently, a team of undergraduate students from the University of Washington Department of Electrical & Computer Engineering (UW ECE) developed a reliable and easy-to-use web portal, which acts as a manual to help technicians load computer software onto airplanes more efficiently. The Aircraft Software Configuration Tool (ASCT) the students designed with guidance from Alaska Airlines assists engineers and technicians with loading software that controls plane navigation, lighting, displays, global positioning and many other important systems. The ASCT is accurate, dependable and so efficient that Alaska Airlines officially adopted the tool and will be implementing it across their entire fleet this year.

In January 2020, Parsons Cai, Shahrzad Feghhi, James Mann, Grant Neuman and Batina Shikhalieva, students participating in UW ECE’s ENGineering INnovation and Entrepreneurship (ENGINE) capstone program, were connected to Alaska Airlines through the UW College of Engineering’s Industry Capstone Program. These programs enable students to work together in teams on industry-sponsored projects, connecting them with companies to tackle real-world multidisciplinary problems. Over the course of winter and spring quarters, the students met regularly with Alaska Airlines staff to develop the ASCT with oversight from Senior Engineer Kevin Hruza and Engineering Coordinator Colleen Piper.

“The students were able to build the ASCT, working part-time with no prior knowledge of our system, in half the time quoted by full-time professional companies,” said Hruza, who recognized the need for the tool early on and had previously sent the project out to bid. “That’s what impressed me the most. They blew away every expectation that I had.”

“They developed a tool that is extremely easy to use, and both engineers and technicians use it,” Piper added. “It eliminates a lot of hunting around for system configurations and needed information. It’s going to make everybody’s life a lot easier.”

How the tool works 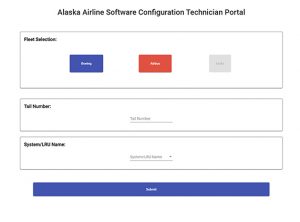 The ASCT user interface is sleek, simple and easy to use. Underneath the surface of the web portal, the ASCT pulls needed information from an engineering database housed on Microsoft Azure. The tool also takes into account the needed software configuration for a specific aircraft and the current status of software updates for that plane.

The ASCT is a sophisticated web portal that replaces an older, online system called the “Illustrated Parts Catalog” (IPC), which required Alaska Airlines engineers and technicians to hunt through multiple web pages and databases to find needed information. The process was often time-consuming and frustrating for staff. Each plane in the Alaska Airlines fleet requires between 30 to 60 different pieces of customized software that needs frequent updating, and because each airplane varies in regard to size, model and needs for scheduled flights, the amount of time staff spent looking for information in the IPC could be considerable.

“Moving to this tool is all about safety, accuracy and accessibility to the technicians,” Hruza said. “Instead of wasting an hour looking up different pieces of software for the aircraft, they can simply have it on their iPad, look it up in a matter of five seconds and have all the information they need to go to work.”

The ASCT functions by pulling information that used to be housed within the IPC from a new engineering database hosted on Microsoft Azure, a cloud computing service. The tool also takes into account the needed software configuration for a specific aircraft and the current status of software updates for that plane.

“The tool is a very fast and simple way to input your tail [airplane identification number], your fleet type and your desired system, and it immediately returns the active current configuration for that system, at that moment,” Hruza said. “It can be accessed on a tablet, or a computer, or a laptop, or even your phone. It’s a very versatile, flexible tool.” 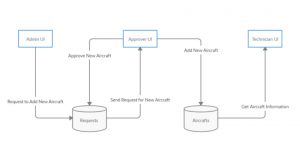 This illustration shows the flow of information through the ASCT. (Click the image to view a larger graphic).

When the students began the project, meetings with Alaska Airlines staff were held in-person, making collaboration relatively easy and straightforward. But after the university moved all spring-quarter classes online in response to the novel coronavirus, project meetings and collaborative work had to be done remotely. Despite the abrupt change to their working environment, the students remained undaunted.

“With the assistance of [Associate] Professor Arabshahi and industry mentors from Alaska Airlines, our team stayed strong throughout the project production and overcame any challenges we faced, including that of moving to the remote world,” Shikhalieva said.

The expected challenge of learning to work together as a team was exacerbated by moving the project completely online; however, this gave the students an opportunity to work on their communication skills and learn how to deal with the unexpected in a professional environment.

“The soft skills that the students developed throughout the six months are really invaluable, learning to communicate in a professional manner with a group of industry engineers over the phone, over email, through presentations. Those types of skills aren’t always readily accessible to students in a traditional engineering curriculum.” said Jill Kaatz, director of the Industry Capstone Program. “This team was fortunate to have interaction with so many different folks at Alaska Airlines, who really generously gave their time and expertise to the students.”

“We got a really great bunch of students that worked well together, and they just kept persevering,” Piper said. “They just jumped in and kept pursuing what we wanted them to do, and they were great about it. I can’t say enough good about these students. They were absolutely can-do.”

The student team worked closely with Alaska Airlines information technology personnel to build the ASCT in Azure. Prior to starting the project, none of the students were familiar with Azure, and developing the ASCT required them to also learn C Sharp and AngularJS programming languages on their own. They had to learn as they went along, building the tool in collaboration with Alaska Airlines staff. This immersive learning experience under pressure ended up benefiting the students.

“This project gave me valuable experience communicating technically in a professional setting on a regular basis, and I was completely inexperienced with web development before this project,” Mann said. “I’m now confident that I could take another web development project and be successful in doing so. This project really taught me to look at an engineering problem and take independent initiative in solving it.”

A student project moves into the real world 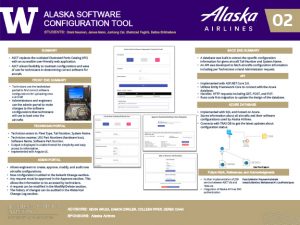 The poster students presented in the 2020 ENGINE Showcase, which explains in detail how the ASCT works. (Click the image to view the poster at a larger size).

On June 10, the student team gave their final ASCT presentation to Alaska Airlines staff. In addition to the skills and experiences they gained, each student received a round-trip ticket anywhere Alaska Airlines flies as a “thank-you” from the airline for developing the tool.

“For a lot of our capstone projects, the level of involvement and the level of effort is at the prototyping stage, rather than producing something where the students can say, ‘You know, my software is flying that jet!’” said Payman Arabshahi, UW ECE associate professor, industry liaison and ENGINE program director. “That’s just mind-boggling, that a student team in six months can do something that maybe with another six months of work on the Alaska Airlines side can actually be production-level, quality code that gets folded into the entire workflow.”

Next steps for Alaska Airlines will be to wrap the software the students developed with proprietary security and login protocols. Then, under oversight from the Federal Aviation Administration (FAA), the ASCT will be integrated into Alaska Airlines organizational structure. Engineers and technicians across the fleet will be trained on procedures associated with the new web portal, and after that, the only way is up.

“Alaska Airlines went above and beyond with their guidance and support,” Neuman said. “You could really tell that Kevin [Hruza] treated this project like it was his baby and cared greatly to see it succeed. I think the mentorship we received was a large reason we made such a fantastic final product.”

“Our journey with Alaska Airlines has been an immense learning experience that gave us unique industry insight during our time at the University of Washington,” Shikhalieva added. “It left a major footprint on our abilities to take on the challenges and build real-world applications that create change in our society.”

“The takeaway is that we all learned about collaboration,” Piper said. “I think the students were incredibly driven. There were obstacles, but they had a dogged approach, and they were very successful. That showed us the real talent that they had.”