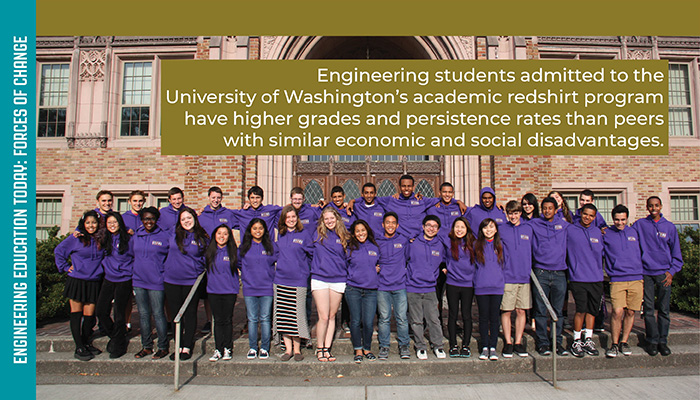 As an engineering educator, Beth Myers knows the value of data in driving practice. She also has learned how numbers can unfairly determine who gets to become an engineer. Before earning a Ph.D. in civil engineering and serving in several research and administrative posts at the University of Colorado Boulder’s College of Engineering and Applied Science, Myers worked in admissions. Her brief: Recruit more women and students of color. Increased outreach spurred applications, yet the percentages barely budged. The reason: Many otherwise qualified candidates—particularly first-generation college-goers and those from rural or low-income families—fell short of the engineering program’s minimum ACT or GPA threshold for acceptance.

“We can’t win this with just recruitment,” Myers, now the university’s assistant vice provost for student success, recalls thinking. “There are not enough racial and ethnic minorities with test scores to get past” the gatekeepers. The experience propelled her to graduate school—and launched a two-decade effort to identify, quantify, and change admissions policies that block promising future engineers with challenging backgrounds from taking to the field. Today, thanks to a program based on “redshirting” in college sports that provides extra support and practice drills for underdeveloped recruits, underrepresented minority students make up 25 percent of CU Boulder’s first-year engineering class. Now in its tenth year, the Engineering GoldShirt Program graduates some of the college’s top performers and has become a model for engineering schools nationwide. Other admission-policy changes have narrowed the gender gap dramatically.

“Diversity begins with who is admitted,” says Beth Holloway, the assistant dean for diversity and engagement and director of the women in engineering program at Purdue University, a pioneer in this field.

Colorado and Purdue are among eight exemplars, including the Universities of Maryland and Washington, Iowa State University, and Texas A&M, participating this June in a National Academy of Engineering workshop on transforming admission practices to promote diversity. Holloway, an ASEE board member, is on the workshop planning committee.

“There are things happening at schools that we don’t know about,” says NAE senior program officer Beth Cady. In some cases, people don’t know why they’re working—just that they do. Cady is organizing the workshop as a way to foster a national conversation. Among the barriers to putting best practices in place, she suggests, may be institutional and faculty resistance to change and a view of diversity as a “zero sum game just because you’re letting in more marginalized populations.”

If anything, reengineering the admissions process has led to higher retention rates, reduced time to graduation, and greater student success at schools that have attempted it. Before the University of Washington changed its outmoded system, in which undergraduates applied for a limited number of spots in each department after two years of taking general engineering courses, only half got into any discipline. “It was brutal,” says Eve Riskin, a professor of electrical and computer engineering and the college’s associate dean of diversity and access, whose department often rejected an even greater share of applicants. When she and her colleagues looked further, they found the admissions ax fell disproportionately on first-generation, low-income, and other students who typically enter with poor science and math preparation. “All they saw was the GPA” and not how far an applicant had come, laments Riskin. “Our system was taking those students, putting them through the wringer, and filtering them out.”

The data underscored the need for change and marshaled support for combining forces with Washington State University to tap Colorado’s expertise and create a similar pathway into engineering—known as STARS, for STate Academic RedShirt—in 2012. Fueled by a National Science Foundation S-STEM grant four years later, this grassroots movement blossomed into a Redshirt in Engineering Consortium that includes Boise State University, the University of California-San Diego, and the University of Illinois at Urbana-Champaign. Programs are tailored to each school’s unique student population and needs but have seven common elements focused on improving engagement, retention, and graduation rates of underrepresented students. Components include “intrusive” academic advising and support services, an intensive first-year experience, faculty mentors, community building, and career awareness. “It’s a way to deal with lack of opportunity,” says Riskin, the principal investigator. The consortium’s goal: six-year graduation rates of 60 percent to 75 percent.

At UW, progress has been remarkable. Far from foundering, STARS students—the vast majority of whom are economically disadvantaged and much more diverse than UW’s engineering student body—often top the curve. They consistently have outperformed peers with similar backgrounds in prerequisite courses, earning higher average grades in subjects like calculus, computer science, and chemistry, for example.

“That was a wonderful surprise,” says Riskin, who sends a congratulations every time one makes the dean’s list and delights that graduates include the child of migrant farmworkers who earned a degree in computer science.

She credits STARS director and co-PI Sonya Cunningham with insisting on high academic expectations from the outset. STARS students reside in a living-learning community their first two years. They study together, bring each other to office hours, and encourage strugglers to hang on. As a result, retention and graduation rates have surged to 76 percent for the first six cohorts—higher than the average nationally and for the engineering college overall, with its more privileged population. “That’s hard to argue with!” says Riskin.

Part of UW’s recipe for success includes induction. Potential STARS recruits are sent fliers alerting them to this alternative pathway into engineering and encouraged to apply. The application includes four essays, with information sessions to address students’ concerns about workloads or whether engineering is really for them. Cunningham also holds a two-week bridge program to ease their transition to college—unlike their peers, STARS students may not have attended a summer science camp or stepped foot on campus before. “It’s like a tiny, private universe within a large university, with lots of research opportunities, internships, culture, plus resources,” says Riskin, who enjoys being able to “make a difference and help people find their pathway”—particularly hardworking young men and women who are “thankful for an opportunity” and “going on to wonderful careers” in such prestigious companies as Amazon, IBM, and Tesla.

Heads of the Class

Other engineering schools have witnessed dramatic strides. Colorado’s GoldShirt initiative, launched in 2009, has welcomed 374 engineering students who initially were denied admission—including some of the college’s most sought-after graduates. Now housed within the Broadening Opportunity through Leadership and Diversity (BOLD) Center, which supports underrepresented engineering students from first year until graduation with community-building experiences, scholarships, tutoring, and industry networking, the program includes letting the engineering school review and override rejected applications for underrepresented students. Reviewers look for transcripts that reveal a passion and aptitude for engineering beyond lackluster ACT scores or grades and ask whether test scores reflect ability or the rural school’s resources. Poor math preparation has been “a huge one,” says Myers, who spearheads student success efforts.

Test score criteria may be the biggest barrier to diversity and equity in engineering, say admissions reformers, noting that such measures of achievement rarely determine academic success in engineering. When Bruk Berhane, an assistant professor and undergraduate program director at Florida International University’s School of Universal Computing. Construction, and Engineering Education, was coordinating recruitment for the University of Maryland in 2011, there were three tiers of students whose eligibility for admission could quickly be sorted according to SAT scores and GPAs. “If you made the cut on the Excel spreadsheet, you were in,” he says. Then the Women in Engineering director asked about adopting Purdue’s more holistic approach to increase gender representation.

“That took me down a rabbit hole,” says Berhane, who spent the next year studying the numbers and experiences of first-generation, female, and other underrepresented groups in engineering.

What emerged was a more transparent, fairer system, where the top and bottom students were clear calls, with leeway to determine whether certain students merited acceptance because of leadership roles, extracurricular activities, or other pursuits that demonstrated a passion and talent for engineering. “For me, it was really about what do we do in those on-the-fence cases,” explains Berhane.

The gamble paid off: The average GPA increased along with the percentage of women and underrepresented minorities. “It was a conversation starter,” says Berhane, whose spreadsheet grew to 26 columns from the original three as he began reviewing students not only for admission but also for the engineering summer bridge programs. Along with the traditional column for math scores, he kept track of financial hardships that may have surfaced on an application essay but not on the federal financial aid form. Some were awarded increased scholarships. Knowing who the students are before they arrive on campus tipped the scales toward equity and inclusion, says Berhane, adding that “in a generation from now, we may not be talking about this.”

Engineering is a data-driven enterprise, however, and measures of academic performance such as test scores are not easily abandoned. What school wants to get accused of lowering standards—or take a hit in the rankings? Colorado’s Myers quantified just how big a barrier scores posed in a presentation at ASEE’s 2019 Collaborative Network for Engineering and Computing Diversity (CoNECD) conference. According to her analysis, if every engineering college used Colorado’s minimum ACT cut score of 28, they’d all be competing for fewer than 1,500 African-American high school graduates each year. “We need to tell the story in a way that people don’t recoil in fear of losing on the U.S. News rankings,” contends FIU’s Berhane, noting that Maryland’s revised admissions playbook included adjusting the SAT math cut score down to around 650. Since introducing the alternative pathway in 2012, average GPAs have increased along with the number of women, minorities, and graduation rates—redefining “selectivity,” in other words.