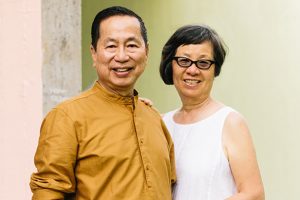 The Chaya Family Endowed Scholarship was recently established through the generosity of UW ECE graduate Boon Chaya (BSEE ‘78, left) and his wife, Chieko (right). The scholarship will recognize and support outstanding undergraduates from low-income and underprivileged backgrounds. Photo provided by the Chaya family.

Beginning this spring, a new scholarship at UW ECE will recognize and support outstanding undergraduates from low-income and underprivileged backgrounds. The Chaya Family Endowed Scholarship, which was recently established through the generosity of UW ECE graduate Boon Chaya (BSEE ‘78) and his wife, Chieko, aims to provide these students with recognition and financial support. Recipients will be chosen by a scholarship committee appointed by the Department chair.

The scholarship will cover necessities for students such as tuition and books, and it will provide important recognition of their hard work and perseverance. Past need-based scholarship recipients at UW ECE have noted that the financial award they received enabled them to have more time to do schoolwork and pursue extracurricular activities such as internships. Oftentimes, these internships lead to lucrative job offers. And with a hard-earned ECE degree in-hand (known in some industry circles as ‘the golden ticket’) students will have many opportunities to significantly improve their economic outlook as they progress in their careers. Other past UW ECE scholarship recipients have stated that they experienced a tremendous boost of confidence knowing someone believed in them by providing a scholarship.

“My UW EE degree gave me a very strong foundation in problem solving that shaped my career success,” Boon said. “It was important to Chieko and I and our family that we give back. This scholarship is about helping to ease the stress of financial burden on students from underserved communities. With this support, we are sending a message of congratulations for getting into an academically rigorous department and to keep up the hard work in tough times.”

A family dedicated to giving back to others 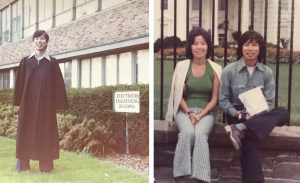 At left, Boon on graduation day at UW EE in 1978. Right, Boon and Chieko at Washington D.C. in 1981. It was during this time that Boon and Chieko co-founded Boma, their family-owned, socially and environmentally responsible jewelry manufacturing company. Photos provided by the Chaya family.

As an undergraduate, Boon’s concentration was in power systems. So, after his graduation in 1978, he went to work for a company in Alaska, calibrating and synchronizing electric power generators. For this work, Boon noted that skills he learned at UW ECE in problem solving, safety and controls were especially valuable.

He and Chieko had a unique vision for their future, and together in 1981, they started Boma, a family-owned, socially and environmentally responsible jewelry manufacturing company. Over the years Boma has flourished, enabling the Chayas to branch out into other industries such as hospitality and commercial real estate development. Recently, Boon and Chieko passed Boma on to their daughter, Suzanne Vetillart, who is now Boma’s CEO. Under her leadership, the company is participating in the MBA Global Consulting Project at the Foster School of Business, and Boma has recently become a Certified B Corporation. This is a designation given to companies that are leaders in the global movement for an inclusive, equitable and regenerative economy and meet high standards of verified performance, accountability and transparency.

Boon splits his time between Seattle and Thailand, and he has been actively involved as a volunteer, mentor, and leader locally and internationally. In 2014, he was appointed as the UW Alumni Association Thailand Chapter president, and he served for five years. During that time, he helped to inspire the launch of UW Converge, an annual global gathering of hundreds of UW alumni, family and friends from around the world, who network and learn from each other. 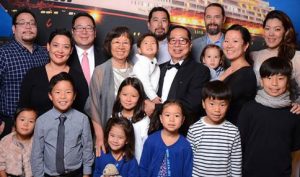 The Chaya extended family, including Boon (center, in tuxedo) and Chieko (left of Boon). Their daughter Suzanne Vetillart (right of Boon), who is CEO of the family’s jewelry company Boma, is continuing the family’s legacy of giving back through the UW. Photo provided by the Chaya family.

When in Seattle, Boon has served as a guest speaker multiple times in the EE 498 Leadership Seminar Series. His talks have been so well-received that UW ECE students often line up afterwards to thank Boon for inspiring them. In addition, he has been a mentor to the UW Thai Student Association. Boon and Chieko both said that they hope this gift to students at UW ECE will inspire others from the international alumni community to give back.

“We are so grateful to Boon, Chieko and the entire Chaya family for their generous support of our students and the Department,” UW ECE Professor and Chair Eric Klavins said. “I know that through this endowed scholarship they will have a profound impact on students for many years to come. They also serve as outstanding role models for us all, demonstrating what it means to lead by example and share success with others by giving back to the community.”

At left, Boon and UW President Ana Mari Cauce (then UW Provost) at a meeting of the UW Alumni Association Thailand Chapter in 2014. Boon served as president of this organization from 2014 to 2019. At UW Converge Taipei in 2019, Cauce awarded Boon with a certificate of appreciation (photo at right) for his years of leadership as the UWAA Thailand president. Photos provided by UW Advancement.