Determination and hard work drive a non-traditional student toward success 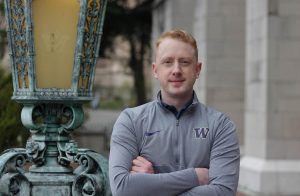 Cody Brereton, a UW ECE undergraduate student in his senior year, started college later in life, but despite facing many daunting challenges that often cause non-traditional students to drop out of school, he persevered, engineering his own pathway to academic success. Today, Brereton is in the top 10% of all students academically in the UW College of Engineering, and he is expecting to graduate this spring.

What would it be like to start college in your 30s? According to Cody Brereton, a 35 year-old undergraduate student in his senior year at UW ECE, returning to school later in life is not easy, but it is definitely rewarding and worthwhile. And like many non-traditional students, the path he followed to achieve his goal of receiving an electrical engineering degree was anything but a straight line.

From an early age, Brereton was naturally inclined toward electronics, taking devices apart and learning how they worked. He wanted to be an engineer, like his father. But the odds of making that dream a reality were unfortunately stacked against him. Brereton was one of six children, and his father, who was a contract aerospace engineer for United Airlines, had to move the family frequently around the country to remain employed. Money was very tight, and there wasn’t a college fund waiting for Brereton when he graduated from high school.

“Literally two days after I graduated from high school, my dad moved my family to England for a job there,” Brereton said. “I knew that if I went to England, I’d never have a shot at doing anything that I wanted to do because it’s even more difficult to find work there than in the U.S. It’s also difficult and expensive to attend college in England as an international student. Since I was in a situation where money was already a problem, that would only complicate things further. I ended up staying behind.”

At age 17, Brereton chose to stay in Indiana, where he had gone to high school, while the rest of his family moved to England. He stayed in Indiana for a few months and then opted to move back to Washington, where he had spent much of his time growing up. He moved in with friends, got a job at a local Pizza Hut and began to build a life for himself. He had very little money, and no scholarships or financial support beyond what he could earn himself, so his dreams of going to college had to be placed on the back burner.

While working at Pizza Hut, he found another job at United Parcel Service to help make ends meet. There, he loaded trucks from 3:00 to 8:00 a.m. every day. Between the two jobs, he made enough money to get by and pay the bills. It was a living.

Refusing to give up 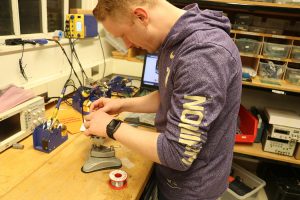 Before his second attempt to return to college, Brereton realized that he needed to fully commit to the endeavor in order to succeed. He sold his house, truck and as many possessions as he could to help fund his education. Taking this risk paid off. He is shown above in the UW Formula Motorsports “pit,” where he applies what he learns in UW ECE classes to designing, assembling and testing electronics in electric race cars.

Within a year, Brereton had moved up to working full-time at UPS as a delivery driver. So in 2005, with a bit more money in his pocket, he thought it might be a good time to go back to school and pursue his dream of becoming an engineer. He enrolled at Everett Community College, but had to drop out after attending only one quarter. The physically demanding schedule of his UPS job, on top of rigorous academic coursework, proved to be too much.

At this point, many people in similar circumstances would have given up altogether on the idea of ever going back to college, but Brereton was determined.

“College didn’t work out for me then, but I put it in the back of my head that I was going to do it again, it just had to be the right time,” he said.

So, he continued working at UPS, saving money and eventually buying a house. Although he was relatively happy and content at his job, his dream of becoming an engineer was always in the back of his mind. He made frequent deliveries to technology companies north of Seattle and interacting with the employees there served as a constant reminder of what he would rather be doing for a living. In 2017, after working for UPS for over 12 years, he made a momentous decision to give college another try. And this time, he went all in.

“I resigned. I sold my house, I sold my truck, I sold everything that I could possibly sell and moved down south,” Brereton said. “I knew that I had to get away from my normal day-to-day life because, otherwise, I would lose focus if I had the same friends around. I had to really step away from all that I knew, so I could fully commit myself to what I’ve always had a passion for and what I wanted to learn.” 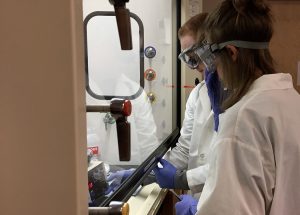 Brereton (background) and his classmate Amelia Dumovic (foreground) working on an organic solar cell research project at Green River College in 2019. Brereton qualified for financial aid through the MESA program at Green River College, which enabled him to finish two years of college prior to transferring to UW ECE. Dumovic is now also an undergraduate student at UW ECE.

When Brereton started school at Green River College in the winter of 2017, he was immediately faced with two challenges that are often typical for a non-traditional student. One was returning to academic life after a long absence.

“I was at a bit of a disadvantage because I hadn’t touched anything school-related in over 12 years. I was scared to take math courses, and I was scared to do all the prerequisite work,” Brereton said. “But I am resourceful. I looked for whomever I could find to help me. I was not willing to let what I was scared of keep me from succeeding.”

Brereton spent time daily in the Math Learning Center at Green River College. When he started, he could barely remember how to do algebra, but he sharpened his skills to the point of receiving a 4.0 in every math class he took at the college, all the way up to differential equations.

The other challenge he faced was how to pay for college after money from the sale of his house, truck and other possessions ran out. He applied for and was accepted into the MESA program at Green River College on the basis of financial need. He also began working as a tutor in the Math Learning Center, providing supplemental instruction for students.

The MESA program also organized tours of the University of Washington for students. Attending these tours and a love for Husky football piqued Brereton’s interest in the University. After two years at Green River College, he applied for admission, was accepted and started attending classes at UW ECE in the 2019 fall quarter as a transfer student. 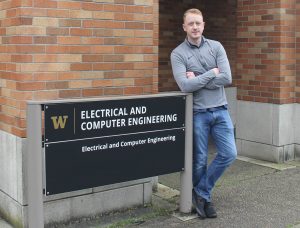 Brereton standing next to the UW ECE sign outside the Paul Allen Center on the UW campus.

Although Brereton had his feet back underneath him academically from two years at Green River College, like many students, he found the UW ECE curriculum to be rigorous and challenging. On top of that, in the spring of 2020 the university had to move all instruction online for health and safety concerns stemming from the novel coronavirus.

According to professor Eve Riskin, who had Brereton as a student in her EE 398 Introduction to Professional Issues course, these sorts of challenges are often enough to dissuade many non-traditional students from completing their education.

“Besides financial issues, students who come from first-generation and low-income backgrounds often do not have families to help them navigate a large institution like the UW. They may not know to seek out advisers or that they should attend faculty office hours,” Riskin said. “Bumps in the road that may not derail a student from a privileged background can be the difference between getting a degree and dropping out for someone who has fewer privileges. This is why mentoring, advising and scholarships are so important to this student population.”

Fortunately, Brereton possessed an uncommon determination to be successful, no matter the obstacles. His belief in himself and what he could become kept him moving forward, taking the challenges life presented and fusing them with what he was learning about engineering into a positive, philosophical outlook. He doubled-down on his efforts to keep up with the academic curriculum, and used the time saved from no longer needing to commute to campus to increase his time studying.

“Problem solving is what engineering is all about. It’s how you handle unconventional problems,” Brereton said. “Not everything is meant to be easy. How you are going to succeed at engineering in the future is highly dependent on the problem-solving skills you develop now.” 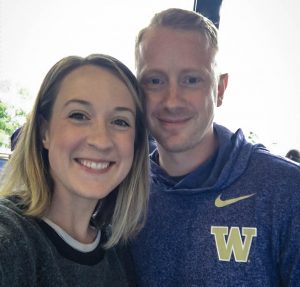 Brereton with his fiancé, Samantha, at a UW Husky Football game in 2019. A love of Husky Football is part of what initially piqued Brereton’s interest in the UW and UW ECE.

Today, Brereton is in his senior year at UW ECE and expecting to graduate this spring. He is in the top 10% of all students academically in the UW College of Engineering, and he recently completed an internship at Puget Sound Energy. There, he took part in a project analyzing how much renewable energy could be incorporated into PSE’s power systems. In his spare time, he is a member of the UW Formula Motorsports team, where he applies what he learns in UW ECE classes to designing, assembling and testing electronics in racing cars. Professionally, he is looking forward to a bright future.

When asked what his goals were after graduation, Brereton replied, “I want to do something that affects us locally. I want to directly affect my community and help in every way possible. In particular, I’m interested in renewable energy, electric vehicles and finding new ways to generate clean electricity. I want to work on technologies that are changing not only the world but start right here at home.”

He also added, “I think at the end of the day, I’d like everyone to know that I was appreciative of my time here and all the professors, teaching assistants and students who have helped me along the way. If I had to do it again, I would. In a big community like this, there are resources for just about everything. I hope people who are interested in going back to school understand that, and they aren’t afraid of taking big steps.”