The Lummi Nation doctor is currently under self-quarantine, but the tribe has been proactively preparing for a coronavirus outbreak for weeks. 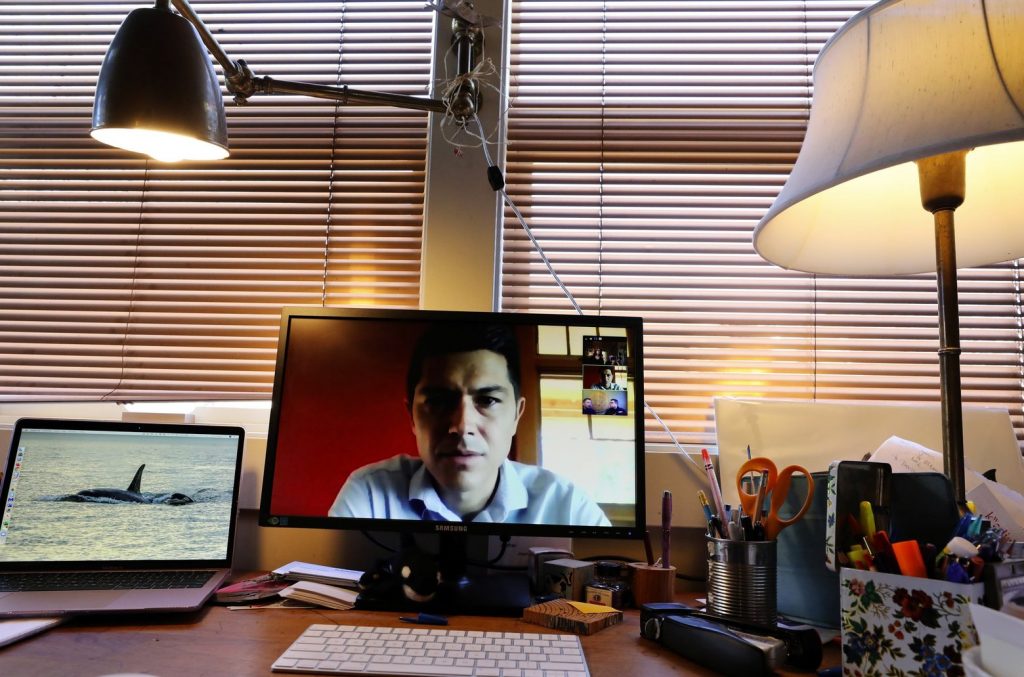 Dr. Dakotah Lane, health director of the Lummi Nation, is in self-quarantine in Bellingham while awaiting test results for the novel coronavirus, or SARS-CoV-2. Here, he’s shown during a teleconference with someone in Seattle, part of the “new normal” for doctors and patients as the virus spreads. (Alan Berner / The Seattle Times)

Adapted from a story by Lynda Mapes, The Seattle Times

When Dakotah Lane decided to change careers and become a doctor, to come home and serve his people, he never thought he’d be in the middle of trying to protect his tribe from a pandemic.

Now Lummi Nation’s first physician from its own community is in self-quarantine, in an empty house. Lane determined he was exposed to the first person at the reservation to test positive for the coronavirus.

Lane is quarantined in his mother’s place while she is away on vacation, to protect his tribe — and his wife and three children, ages 8, 5 and 2, at home.

Lane, 39, and the tribe’s medical director, has no symptoms and is hoping for the best while waiting for test results.

No matter how it comes out, Lane said he is glad to be where he is. He came back to the reservation in 2016 to practice family medicine after getting his medical degree from Weill Cornell Medicine at Cornell University in New York. It was a switch for him after starting out as an electrical engineer with a degree from the University of Washington (UW) in the Department of Electrical & Computer Engineering (ECE).

He felt called to serve his people.

Eve Riskin, UW ECE professor and the Associate Dean of Diversity and Access at the UW’s College of Engineering, fondly recalls Dr. Lane’s selflessness and desire to help those in need.

“Dakotah was a student of mine last decade and I was happy to write letters of recommendation for him for medical school”, she said. “He visited me in 2006 and talked about his time teaching school in Malawi while in the Peace Corps. He had taken in two teenage boys to live with him while he was there. When I said, ‘Wow, TWO TEENAGE BOYS?!!’ he simply replied, ‘They had no place to go.’ Even as a young man he had plans to return to the Lummi Nation to improve health care. He has more than fulfilled his goal. I am so proud Dakotah is one of our alumni.”

Protection is what Lummi has been all about as the tribe has taken strong measures that began in February – and they’ve gone further than many governments to protect their people.

“At first in January we were just watching it, and didn’t expect anything,” Lane said. “There was a lot of doubt when we first started, there was a lot of disbelief,  ‘Are we overblowing this, are we crying wolf?’ But in February, it became clear to us we need to start acting right now.

“Then when we had our first case, it became very real.”

Two more positive cases were reported by the tribe Tuesday evening; both people, including a tribal member, are in self-quarantine.

“A successful job is seeing lower numbers of deaths,” he said. “We don’t want to see our loved ones be buried. We struggle with that enough in normal day-to-day life. This is going to test us all.”

The tribe was prepared. Unlike public health resources in many communities outside the reservation, the tribal council had been building up the tribe’s health system, doubling the number of doctors in the past three years to eight. That includes Lane’s former high school soccer teammate, Justin Iwasaki, and Cristina Toledo-Cornell, a classmate from medical school. Tara Olsen, a Lummi tribal member, is the tribe’s health care administrator, “the oil that makes the machine run,” Lane said.

“This is so much a team effort, without them we would not be where we are today and that goes for our council,” Lane said. “We could just as easily have a boss that doesn’t listen, but they have been there right from the beginning.”

Lummi started gathering medical supplies, including test kits from a range of sources — including a vendor now sold out — and personal protective equipment in February, and reached out to the UW to arrange test processing. The tribe had 300 tests on hand as other clinics around the region were scrambling.

The Lummi Nation also has taken steps to bring medical care and support to their community, right to their homes. The tribe purchased iPads and Wi-Fi hot spots, dropped off at patients’ doorsteps for in-home, door-to-door telemedicine. The tribe also has drive-thru testing for anyone who meets the criteria for it.  The tribe even set up a medical tent outside, for people who need hands-on examination.

All dental appointments have been canceled, and the dental staff, other than a skeleton crew for emergencies, has been repurposed to help with the virus response, including testing.

The tribe, before the state or federal authorities, called for extreme social distancing. But to make sure elders and others have what they need, food is being distributed door to door, and drive-ups to distribution points are available around the reservation for people still able to leave their homes.

“We have been taking this very seriously from the beginning,” said Lawrence Solomon, chairman of the Lummi Indian Business Council. “It is impacting our family; these are not just our citizens, these are our relatives, our brothers and our sisters, aunts, uncles and grandmothers and grandfathers.”

The tribe has emphasized empowering its health team as the core of its response, Lewis said.

“We are leading through the lens of protecting our people and that has enabled us to be very progressive, we are doing things other tribes and communities aren’t yet able to.” he said. “We knew we needed to get out of the way and let the professionals do their jobs and support our health team.’’

This is one community where vaccinations also have become a broadly accepted routine. “It’s just, ‘Talk to your grandparents, they can tell you the stories of why,’ ” Lane said.

The community is 100% mobilized now to stop this new threat, Lane said.

“All of these people are our relations. We want them to live.”

UPDATE:  The Lummi Nation began vaccinations on Thursday, December 17, 2020, becoming one of the nation’s first to provide protection for its tribal members. 300 doses of Pfizer’s vaccine were received earlier that week, said Dr. Lane, the medical director of the Public Health Department for the tribal nation. Read the Seattle Times article here.