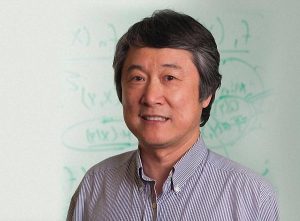 Li Deng, an affiliate full professor in ECE, has been named a Fellow of the Canadian Academy of Engineering (CAE) in recognition for his research in deep learning and speech recognition.

CAE is the national institution through which Canada’s most distinguished and experienced engineers provide strategic advice on matters of critical importance to Canada. Deng was inducted with 48 other Fellows today (June 21).

“Over our past 32 years, Fellows of Academy have provided insights in the fields of education, infrastructure and innovation, and we are expecting the new Fellows to expand upon these contributions to public policy considerably,” said president of CAE Eddy Issacs. “They are engineers from widely varying backgrounds, from Industry, Academe and Government, but they all have in common the demonstrated desire and ability to go beyond the normal practice of engineering and serve as role models in their fields and to their communities.”

Deng, who has been an affiliate in the department since 2000, is an internationally prominent researcher, engineer, educator and technology leader in artificial intelligence, machine learning, signal processing, financial engineering, speech recognition, and natural language processing. He has invented a series of ground-breaking machine learning paradigms, architectures, methodologies, and algorithms for hidden Markov models and deep neural networks. He has been widely recognized for his 2009-2013 pioneering contributions to world-wide speech recognition industry using large-scale deep learning. His original and landmark research, over 30 years, combined with his outstanding leadership in advancing engineering knowledge, have culminated in the spectacular effects of deep learning and AI on society today.

Deng has been the Chief Artificial Intelligence Officer of Citadel since May 2017. Prior to Citadel, he was the Chief Scientist of AI, the founder of the Deep Learning Technology Center, and Partner Research Manager at Microsoft and Microsoft Research , Redmond (2000-2017). Prior to Microsoft, he was an assistant professor (1989-1992), tenured associate (1992-1996), and full professor (1996-1999) at the University of Waterloo in Ontario, Canada. He also held faculty or research positions at Massachusetts Institute of Technology (Cambridge, 1992-1993), Advanced Telecommunications Research Institute  (ATR, Kyoto, Japan, 1997-1998), and HK University of Science and Technology (Hong Kong, 1995). He is a Fellow of the IEEE (since 2004), a Fellow of the Acoustical Society of America (since 1993), and a Fellow of the ISCA (since 2011).

Read more about him in Medium.