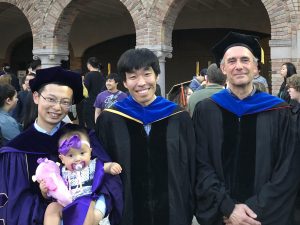 Bolun, his daughter, Zhang and Kirschen

Xu, who was co-advised by ECE professors Daniel Kirschen and Baosen Zhang, received his undergraduate degrees from Shanghai Jiaotong University and the University of Michigan. He received his master’s degree from ETH Zurich and his Ph.D. from the UW. He is currently a postdoctoral associate in MITei and LIDs. He will join Columbia as an assistant professor in earth and environmental engineering in January of 2020.

“Bolun is one of the world’s leading specialists on the integration of battery energy storage in the grid,” Kirschen said.

Edward Wang, who was advised by ECE and CSE professor Shwetak Patel, received his undergraduate degree from Harvey Mudd College and completed doctorate at the UW in the spring. He will join UCSD ECE and the Design Lab as an assistant professor with affiliate appointments with CSE and Bioengineering. 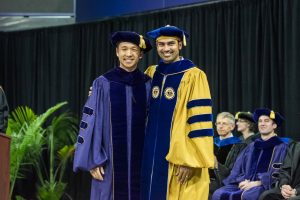 “Edward is creating new solutions in health monitoring though his expertise in mobile and embedded system prototyping, signal processing, machine learning and a strong command of medical knowledge,” said Patel.

Tenure-track is a professor’s process by which an assistant professor becomes an associate professor and then a professor.