Olis Robotics, formerly BlueHaptics, has received a $50,000 grant from the U.S. Air Force. The company, founded by ECE professor Howard Chizeck and ECE affiliate professor and alumnus Frederik Ryden, is a next-generation software platform that greatly expands the capabilities of pilot-controlled service robotics in the field. The Air Force’s Small Business Innovative Research award, which begins with the initial $50,000 with a chance of up to $1.5 million in future funding, will allow Olis Robotics to use their AI-driven software platform to try to service satellites already in space.

Chizeck’s startup is receiving a lot of attention for this exciting work. Read more about it in Geek Wire, Space News, ZDNet and Air Force Technology. Olis Robotics is also working with Tethers Unlimited to create a remote-controlled robotic systems in space. Read more about it in Geek Wire. And in other news about Olis Robotics, the company is working with Olympus Controls to explore autonomy for remote robots, according to Robotics Business Review. 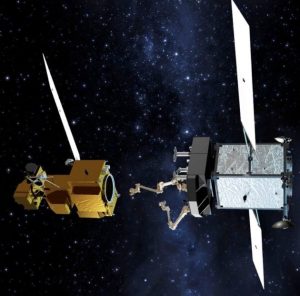 An artist for NASA’s conception shows one satellite extending its robotic arm to grasp and refuel another satellite in orbit.