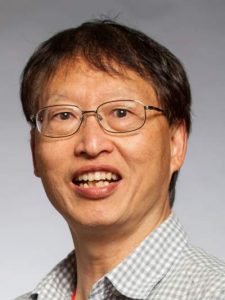 A team of UW students and researchers has been recognized for its significant research in improving transportation systems.

“Our team members consist of all different kinds of expertises, from deep learning detections, statistical machine learning, computer vision, image/video processing algorithms, multiple object tracking within one camera and across multiple non-overlapping cameras,” Hwang said. “Most importantly, they are working closely and very hard from February to early May, day and night, with close discussions as a team.” 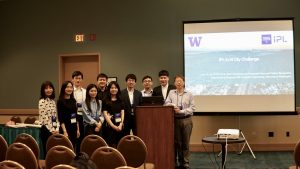 Hwang and his team at the challenge workshop.

The challenge that the team has been working so hard on tasks competitors to interpret copious hours of traffic footage from cameras on the highways and streets to better understand transportation. Each track challenge has footage from different locations. Teams have to use their own programs to analyze the footage and find the solutions to problems given to them for the challenge.

The group won first place in the first track—which focused on traffic flow analysis. They won runner-up in the second and third tracks. The second was anomaly detection and the third was multi-sensor vehicle detection and reidentification.

The goal of the challenge is to encourage research teams to work hard to make transportation systems smarter, based on sensor data from traffic, signaling systems, infrastructure and transit. For more information on this year’s workshop.