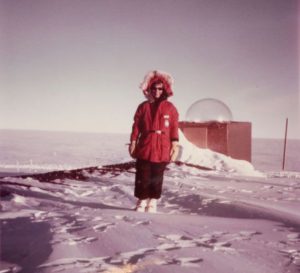 Peden was honored with the 2018 Diamond Award for Distinguished Service. The Diamond Award is recognized as the UW College of Engineering’s highest alumni award.

“A lot was riding on Peden’s work beyond developing a new tool to probe the icy subsurface of Antarctica. Although the National Science Foundation (NSF) was supportive of Peden’s work, the Navy was still hesitant to bring women to the southern continent. Peden was unofficially told before she departed that if she did not complete her experiment and publish the results, another woman wouldn’t be allowed to follow in her footsteps for at least a generation.”