The National Science Foundation announced that it is awarding grants totaling $8.5 million to 19 collaborative projects at 23 universities for the study of complex and entrenched problems in data science. Three of these projects will be based at the University of Washington. The grants build on a 2017 award in the Transdisciplinary Research in Principles of Data (TRIPODS) program, which led to the founding of the Algorithmic Foundations of Data Science Institute (ADSI) at UW. ADSI focuses on developing theoretical and algorithmic tools bridging mathematics, computer science, and statistics for addressing contemporary data science challenges. The new grants make up the TRIPODS+X program, which expands these big-data projects into broader areas of science, engineering, and mathematics. 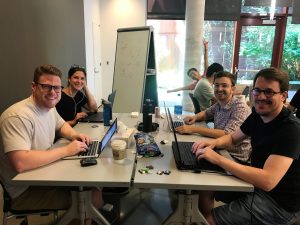 Students at the NeuroHackademy.

“Our training will be designed to bridge the gap between state-of-the-art foundational research in mathematical and algorithmic tools, with scientific applications, which is much in spirit of the TRIPODS+X program,” Fazel said.

“In the new grant, we will leverage a new and exciting model for education and collaboration, namely the hack-weeks model, a format that UW’s own eScience institute has done pioneering work on developing,” Fazel said. “The project is exciting because we get to connect our theory and algorithms to two important scientific domains, neuroscience and geoscience, which in recent years have had access to massive data sets and where data science tools are poised to help make breakthroughs.”

Fazel is also a researcher on another TRIPOD+X project, “Safe Imitation Learning for Robotics,” which is led by Harchaoui. This project will focus on developing mathematically rigorous algorithms for imitation learning in robotics, a form of learning in which a robotic system learns through demonstration.