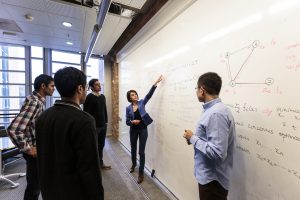 The UW will host the Institute for Foundations of Data Science to develop the theoretical foundations of a fast-growing field: data science. UW ECE professor and Associate Chair for Research Maryam Fazel, shown here in a 2015 photo, will lead the institute. Photo credit: Patrick Bennett

The University of Washington (UW) will lead a team of institutions in establishing an interdisciplinary research institute that brings together mathematicians, statisticians, computer scientists and engineers to develop the theoretical foundations of a fast-growing field: data science.

The Institute for Foundations of Data Science (IFDS) is a collaboration between the UW and the Universities of Wisconsin-Madison, California Santa Cruz, and Chicago, with a mission to develop a principled approach to the analysis of ever-larger, more complex and potentially biased data sets that play an increasingly important role in industry, government and academia.

Support for the IFDS comes from a $12.5 million grant from the National Science Foundation and its Transdisciplinary Research in Principles of Data Science, or TRIPODS, program. Today, the NSF named IFDS as one of two institutes nationwide receiving the first TRIPODS Phase II awards. TRIPODS is tied to the NSF’s Harnessing the Data Revolution (HDR) program, which aims to accelerate discovery and innovation in data science algorithms, data cyberinfrastructure and education and workforce development.

“With NSF’s $25 million investment, these interdisciplinary teams will be able to tackle some of the most important theoretical and technical questions in data science,” said NSF Division Director for the Division of Mathematical Sciences Juan Meza.

IFDS research will lead to algorithmic decision-making processes that tackle incomplete or ambiguous datasets and are better able to respond and act in changing environments. The team will also study some of the ethical implications of data-driven algorithms.

“As data science is increasingly incorporated in all facets of our lives, its success is uncovering pressing challenges that call for new theories,” said Maryam Fazel, a UW electrical and computer engineering professor and the lead principal investigator for the IFDS. “We need the expertise of all core disciplines to understand the mysteries and to address the pitfalls of data science and artificial intelligence algorithms.”

“The success of the UW team in establishing the IFDS stems from having fantastic faculty from four departments, representing both arts and sciences and engineering, working collaboratively on the most important foundational questions of data science,” said Nancy Allbritton, dean of the College of Engineering. Dan Pollack, dean for the Nature Sciences, added, “We are confident that this multi-institutional, multi-disciplinary effort will shape the future of the field.”

The UW team of investigators has been laying the groundwork for IFDS during the past three years. UW’s Phase I TRIPODS Institute was established in 2017 with a $1.5 million award from the NSF. Since then, the team has collaborated across disciplinary boundaries to address reliability and scalability of data science algorithms, and has also forged new partnerships.

“The strategic partnership between Washington and Wisconsin was crucial to the success of IFDS in the Phase II competition, and we are excited to build on this relationship over the next five years, ” said Stephen Wright, a professor of computer science who headed the TRIPODS Phase I effort at the University of Wisconsin.

In 2018, the UW team received three additional awards from the NSF’s new TRIPODS+X program, through which members of the team partnered with other researchers to address data science challenges in fields such as robotics and epidemiology.

“IFDS is an exciting culmination of these Phase I efforts,” said Fazel, who is also the Moorthy Family Professor in the electrical and computer engineering department. “It opens the door to further collaborations across our partner institutions and with practitioners in academia and industry, and helps place the UW and Seattle prominently in the national data science research effort.” 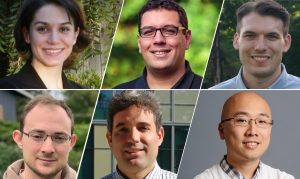 “The team adopts a neoclassical viewpoint in order to define notions of optimality, robustness and calibration, that is relevant for modern day data science. These new notions will shape the research in order to develop new theories, methods and algorithms to be used by scientists and engineers,” said co-principal investigator Zaid Harchaoui, an associate professor of statistics.

The five-year funding plan for the IFDS Phase II includes support for new research projects, workshops, a partnership across the four research sites and students and postdoctoral scholars co-advised by faculty from different fields. Plans for education and outreach will draw on previous experience of IFDS members and leverage institutional resources at all four sites.

“A central goal of IFDS is to develop algorithms with best-in-class performance for data scientific tasks. Recent breakthroughs in this area (in part by UW investigators) have benefitted from combining techniques across computer science, mathematics and statistics. An interdisciplinary approach to data science will be a key ingredient of the future work at IFDS.” said co-principal investigator Dmitriy Drusvyatskiy, an associate professor of mathematics.

IFDS will cultivate existing ties with the UW eScience Institute, as well as work with the newly-announced NSF AI Institute, in which UW also participates.

In addition to Fazel, Harchaoui and Drusvyatskiy, the UW IFDS team includes Kevin Jamieson and Yin Tat Lee, assistant professors in the Paul G. Allen School of Computer Science & Engineering. The original UW team was recently joined by Abel Rodriguez, professor and chair of the statistics department, who comes to the UW from University of California, Santa Cruz and serves as the diversity liaison for the Institute.