If tracking “murder hornets” sounds more like a job for an entomologist/detective, you might be surprised by this member of the hornet-tracking team: a Ph.D. candidate at the University of Washington’s Department of Electrical and Computer Engineering (UW ECE) named Vikram Iyer.

One of his most recent endeavors was collaborating with entomologists to track Asian hornets (also called “murder hornets”), which have been spotted in Washington state. According to Washington State Department of Agriculture (WSDA), these hornets, which are originally from certain parts of Asia including Japan, South Korea, and China, are dangerous and efficient killers of bees. In a mere few hours, just a few Asian hornets can attack and slaughter an entire colony by decapitating the bees and taking over their hives. The WSDA warns that these hornets pose an immeasurable threat, and if they are not held in check and eradicated, they have the potential to damage the environment, economy, and public health.

“We heard about this issue with the murder hornets and thought, ‘We have the technology that could potentially be helpful with this problem,’” Iyer says. He contacted WSDA and explained that they have little wireless transmitters that could be used to tag a hornet and then track it back to its nest.

“The past few years, I’ve done a series of projects where we’ve been developing small electronics, things like little wireless sensors that are small enough to ride on the back of live insects,” says Iyer. His portfolio includes putting a sensor on a live bumblebee, a camera on the back of a live beetle (which was published in a July 2020 study in ScienceRobotics), and mounting sensors on moths that can be dropped at specific targets.

Iyer notes that this experience was handy as the Asian hornet species nests underground, which makes it that much harder to locate them. Efforts in other countries to track them are often unsuccessful.

“We started thinking about how we can use a small radio tag to actually follow the insect,” Iyer says. Their device has a battery, radio chip, antenna, and temperature sensor, and it sends out a Bluetooth signal about two times per second.

“We heard about this issue with the murder hornets and thought, ‘We have the technology that could potentially be helpful with this problem,’” Iyer says.

So far, WSDA has been able to identify two hotspots of activity near the Canadian border using a network of traps they set up. Then, when they caught a live hornet, Iyer went to where the WSDA entomologists were and helped them put the tracking devices on the insect. While Iyer has put devices on other insects such as bees and beetles himself for his previous projects, he left this one up to the insect experts: These murder hornets are not just dangerous for bees — they have extra-long stingers that they can use repeatedly and can squirt a caustic venom.

Using a little noose made from dental floss and glue, the lead WSDA entomologist attached Iyer’s device onto the hornet after putting the hornet on ice to sedate it. Then they let it go.

“We were able to follow it for about a quarter of a mile on our first attempt,” says Iyer. After flying for some time up in the trees, the hornet came down closer toward the ground and stopped for a while in a big patch of blackberries, where the team thought the nest might be. Unfortunately, it flew away at some point and they ended up losing the signal as it went further into the woods. 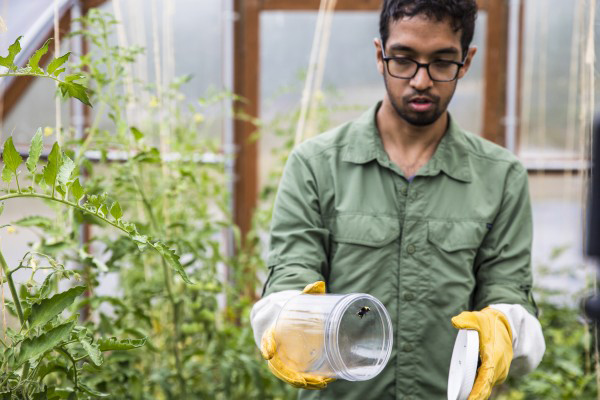 Vikram Iyer investigates how a bumblebee (inside the container) performs with the sensor package attached to its back. Photo by Mark Stone/UW Photo

As of now, there are more hornets still at large, but with Iyer’s tech in the field, scientists have a much better shot at finding the nests. “This confirms that our tracking devices work, that this general approach works,” Iyer says. “It also points us in the same direction as a number of other sightings that are all kind of clustered around the same patch of woods pointing in one direction.”

A 2020 recipient of The Marconi Society Paul Baran Young Scholars award, Iyer was recognized for his research focusing on different kinds of wireless technologies, including bio-inspired and bio-integrative wireless sensor systems, for communication, wireless power delivery, data collection, and more.

Iyer has also been working on a project where a live insect or a small drone can carry some sort of sensor and then drop it at a location that is hard-to-reach or dangerous, like a volcano or for forest fire monitoring.

In addition to his UW projects and applying for faculty positions, Iyer is also working with researchers at Microsoft on an air quality monitoring platform for cities that uses gas sensors to monitor air quality on a more granular scale.

“I’m inspired by natural systems to design things, and my most recent works have been trying to augment them and leverage the capabilities of live animals to complement what we can engineer,” says Iyer. “That’s something that I’m interested in exploring.”