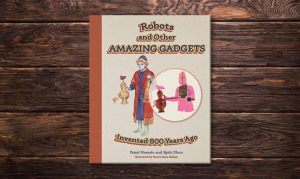 “Robots and Other Amazing Gadgets Invented 800 Years Ago,” a children’s book by the UW’s Faisal Hossain and Qishi Zhou, shares the inventions of Ismail Al-Jazari, a 12th-century polymath considered by many to be the “father of robotics.”

Adapted from an article by Misty Shock Rule, UW News

Digital technology shapes how many children today interact with the world. The COVID-19 pandemic intensified this wired existence, with everything from school to playdates taking place online.

With this in mind, Faisal Hossain, a hydrologist and University of Washington professor of civil and environmental engineering, and Qishi Zhou, a UW master’s student in electrical and computer engineering, set out to show children how technological breakthroughs predated the internet and were inspired by the natural world.

In their children’s book “Robots and Other Amazing Gadgets Invented 800 Years Ago,” illustrated by Hatice Sena Balkan, Hossain and Zhou write about the work of Ismail Al-Jazari, a 12th-century polymath considered by many to be the “father of robotics.” The book, published by Mascot Books, explores the origins of eight of Al-Jazari’s inventions, including a four-cycle gear system, a blood measurement device, an elephant-shaped water clock and a robot that helps wash and dry hands.

A few years ago, Hossain discovered Al-Jazari’s work, “The Book of Knowledge of Ingenious Mechanical Devices.” Hossain was amazed by the inventions and robots in the book and was eager to learn more.

Around the same time, Hossain met Zhou as part of the College of Engineering’s industry capstone program, where they worked with teammates to create a remote-controlled culvert inspection vehicle called the HydroCUB. Hossain and Zhou worked together well and decided to collaborate on sharing a medieval story relevant to children today.

Hossain answered questions from UW News about the book.

What’s the most important thing you want kids to get from the book?

We want them to know that the real world, outside of the digital world where they might be spending most of their time, can be a fascinating and wonderful place. The natural world is a laboratory that can show them how water works and moves. A pioneer of modern-day robotics invented robots by borrowing principles from the real world. That’s the message we want our kids to take: Spend more time outside watching and learning from nature and less time with computers.

What’s your favorite invention in the book?

I like the one about the robot that automatically dispenses water to clean and perform ablution, or washing. While the user is cleaning themselves, the robot plays a flute-like sound, which was also an invention, and then hands the user a towel. Every sequence of the task is timed and organized.

Can you share more about how you came to work with Zhou on this book?

When I met Qishi Zhou, I found we partnered really well on water issues, combining my understanding of the needs of the water community — the broad community that works on water issues for research, industry, policy, planning and utilities — with the expertise available from the electrical and electronics engineering design community to solve real-world problems. The partnership was based on the development of robots and gadgets to solve societal problems, improve quality of life and address societal needs. This was almost like a microcosm of what Ismail Al-Jazari did 800 years ago when he used automation to create tools to improve quality of life.

How does your interest in Al-Jazari relate to your expertise as a hydrologist?

I became interested in Al-Jazari because he used water as a core concept to drive the automation architecture of his devices using simple concepts of hydrostatic pressure and water flow laws. As a hydrologist, this is what we also study and use, but it never dawned on me that such concepts could be used to drive automation and even build robots when there was no electricity. It just drove home the concept that water is as powerful and relevant as today’s electronics, computers and information technology. This thought makes me feel quite proud as a hydrologist.

Outside of your work as a hydrologist, you specialize in filmmaking and the communication of science. What do you think is most effective at sharing the wonder of science with kids?

I don’t think there is one perfect or single way. But I do think there has to be a great story that will get kids hooked and want to know more. Often, that’s a story that kids can relate to, based on their personal experiences — so a story that humanizes the topic and is of a broad and uncommon perspective, with fun action that appears counterintuitive or is against mainstream thinking.