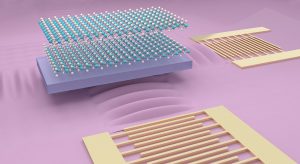 A research team led by UW ECE Professor Mo Li has developed a method of using soundwaves to move subatomic quasiparticles known as ‘excitons’ a much greater distance than ever before possible. The team’s innovations lead the way to development of a new type of computing circuit, one that is faster and much more energy efficient, using light and quantum phenomena to store, process and transmit information. Shown above: an illustration of the 2D material (tungsten diselenide) Li and his team used to capture and move the excitons. The material layers are each only one atom thick, which for practical purposes, makes them two-dimensional. The layers are flanked by devices that generate sound waves capable of moving excitons relatively long distances. Illustration provided by Ruoming Peng

Most people have probably never heard of an ‘exciton’ before. But scientists and engineers have been working with excitons for some time now, seeking ways to unlock the potential these subatomic quasiparticles have to revolutionize modern electronic circuitry and optics in commonly used devices such as solar panels and light-emitting diodes (LEDs).

Excitons are considered quasiparticles because they are quantum phenomena resulting from the interaction between two particles within solid matter. An exciton is created when an electron absorbs light (in the form of a photon) and jumps to a higher energy state, leaving a ‘hole’ behind in its previous position — something akin to a tiny bubble floating in water. The negatively charged electron and the positively charged hole remain bound together by electrostatic forces, and together they form what is known as an exciton. Once the electron falls back into the hole, it emits a photon, and the exciton ceases to exist.

Excitons contain internal quantum properties that can be used to store information transmitted through light. And because excitons are charge-neutral — the negatively charged electron and the positively charged hole cancel each other out — they escape energy-scattering losses from electrically-charged disorder or lattice vibration, which makes today’s electronic circuitry unpleasantly hot and drains the battery fast. These qualities make excitons promising candidates for increasing the speed and energy efficiency of computing and a wide range of electronic and optical devices.

However, a big challenge for engineers is the fact that excitons are temporary, typically lasting only a few microseconds at most. So, finding ways to stabilize excitons and move them in a controlled direction beyond the short distance in which they naturally diffuse and disappear is a crucial step toward engineering energy-efficient exciton circuits capable of replacing standard circuits in modern electronics.

Over the last two years, a University of Washington research team led by Mo Li, a professor in the electrical and computer engineering department and the physics department, has developed an innovative way to use sound waves to transport excitons over the distances needed to create exciton transistors, switches and transducers — the building blocks of exciton circuitry. In a recent paper published in Nature Communications, Li and his team demonstrate how they were able to extend exciton life and use sound waves to move these quasiparticles distances over 10 times further than what other researchers have been able to achieve to date.

“In our innovation, we used two atomic layers of 2D materials (tungsten diselenide) stacked on top of each other. When light is applied and excitons form, the electrons separate out into one layer and the holes they leave behind go into the other,” Li explained. “The electrons and the holes are still close enough to each other to remain bonded together, and because they are on separate layers, it’s much harder for them to recombine. This makes the excitons live much, much longer — more than 10 times longer than they would on a single layer. From there, we used acoustic waves to move the excitons further than has ever been achieved before.”

Laying the groundwork for exciton circuits 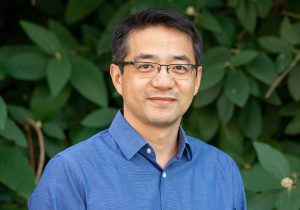 UW ECE Professor Mo Li, who is also a professor in the physics department, led the UW team that made this research advance. Li is also a member of the steering committee for the Quantum X Initiative at the UW and a member of the Institute for Nano-Engineered Systems (NanoES).

In their experiments, the team was able to transport excitons far beyond the diffusion limit — the distance from its origin at which an exciton naturally recombines — moving them 20 microns in a controlled direction at 100 K (-280° F). They also demonstrated success transporting excitons well beyond the diffusion limit at room temperature. A distance of 20 microns may not seem very far, but it is over 10 times further than the exciton’s natural diffusion limit, which is far enough to demonstrate the viability of exciton circuitry. And until now, most research teams have only been able to move excitons a few microns in similar 2D materials.

“The reason we demonstrated moving the excitons 20 microns is because our material is 20 microns wide,” said Ruoming Peng, the paper’s lead author. “If the material were larger, say 100 microns (a typical size for sophisticated electronic circuitry), we could move them that far using stronger sound waves. We are only limited by the size of the device.”

Excitons are unresponsive to an electrical charge because they are charge-neutral, but when struck by sound waves, these quasiparticles will move in the direction the waves travel. A key innovation by the team was orienting sound waves perpendicular to the plane of the atomic layers that contained the excitons.

“Our main innovation here was to generate a primarily vertical acoustic field but not a horizontal field,” Peng explained. “We used that vertical field, which oscillates and moves, to push the excitons away, along the direction in which the sound wave propagates. You could say that the excitons were ‘surfing’ the sound wave! Prior to this innovation, excitons could not survive and would dissociate with the surface acoustic wave. Our group was able to suppress the detrimental effect of the acoustic wave but keep the beneficial effect.”

A bright future for excitons

This work shows that sound waves are an effective, contact-free means to shuttle excitons over relatively long distances in a controlled direction. And that means exciton circuits are a real possibility for the future, leading to faster and more energy efficient computing and optical devices such as LEDs, better sensing and detection devices, and improved speed and efficiency within electronics we use every day.

Next steps for Li’s research team include building on their findings by constructing a large-scale exciton circuit prototype, one that can store, manipulate and transmit data through light and the quantum information inherent to these quasiparticles.

“This advance is very exciting. It shows that we can build a much larger exciton circuit than before, and possibly at room temperature,” Li said. “We can move excitons from one end of a computer chip to another, and we have an idea for how to make them do 90-degree turns. We already know how to use excitons to store, transport and manipulate quantum information. And larger areas of the materials we use to hold the excitons are becoming available now. Altogether, this makes building a much larger-scale, integrated exciton circuit possible, a new and revolutionary system for all kinds of applications.”