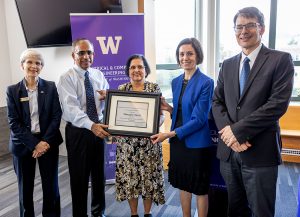 On Friday, September 16, 2022, UW ECE held a formal academic ceremony — an investiture — celebrating the inaugural awarding of the Moorthy Family Inspiration Career Development Professorship. The event recognized Ganesh and Hema Moorthy, who established the Professorship at UW ECE, and honored the first recipient, UW ECE Professor and Lytle Lectureship Chair Maryam Fazel. The investiture took place on the fourth floor of the Electrical & Computer Engineering Building at the UW and was hosted by UW College of Engineering Dean Nancy Allbritton and UW ECE Professor and Chair Eric Klavins. The audience at the event reflected the interdisciplinary nature of Fazel’s work, with faculty collaborators, graduate students, staff and friends from across campus in attendance.

The Moorthy Professorship is a visionary endowment, which was established in 2019 by the Moorthys for the purposes of recruiting, rewarding and retaining UW ECE faculty members who have demonstrated excellence in research, teaching and leadership. Fazel was selected as the first recipient of the Professorship in recognition of her outstanding, innovative work as a researcher and educator and for her service to the Department as Lytle Lectureship Chair and former Associate Chair for Research. 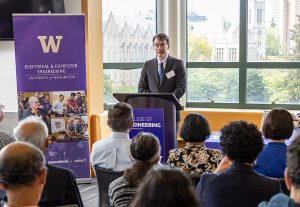 UW ECE Professor and Chair Eric Klavins spoke at the investiture, expressing appreciation to the Moorthys and noting Fazel’s dedication as a teacher, adviser, mentor and member of the College and University community.

“Maryam is an explorer at the intersection of electrical engineering and computer science, statistics and math. She’s one of the world’s experts on the theory of mathematical optimization and its applications to machine learning, signal processing and control systems,” Klavins said at the event. “In addition to being an outstanding researcher, she is a dedicated teacher, adviser, mentor and member of our college and university community. We are excited to name her as the inaugural recipient of this Professorship.”

Allbritton thanked the Moorthys in her remarks and emphasized the significance of professorships to the University. 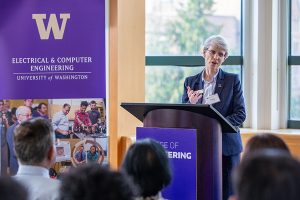 UW College of Engineering Dean Nancy Allbritton thanked the Moorthys at the event and explained the significance of professorships to the College and the University.

“One of the things that is so important about these professorships is that they allow faculty to pursue high-risk research or novel ideas that are not yet fundable by other sources. It gives faculty a chance to be on the cutting edge in terms of the ideas they are exploring,” Allbritton said. “And often, faculty choose to use funds for student support, letting students work with some of these innovative ideas. It has a remarkable overall effect on the individual recipient, the students and on building recognition of the department.”

At the event, Fazel was presented with a framed certificate honoring her as the inaugural recipient of the Professorship, and the Moorthys were presented with a plaque, acknowledging their generous contribution and longtime support of the Department.

“This endowed Professorship is not only a kind gift to our Department, to the College and to the University of Washington, it is a recognition of the importance of scholarship and the role of academia in generating new knowledge and new ideas,” Klavins said. “It raises the stature of our faculty, and it helps us compete with the many other ECE departments around the world. So, Ganesh, Hema, and the entire Moorthy family, thank you.” 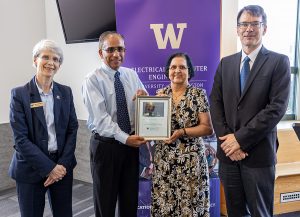 The Moorthys (center) were presented with a plaque at the investiture, recognizing their establishment of the Professorship and acknowledging their generous contributions and longtime support of the Department over the years. From left to right: UW College of Engineering Dean Nancy Allbritton, Ganesh Moorthy (BSEE ‘81), Hema Moorthy, UW ECE Professor and Chair Eric Klavins.

Ganesh and Hema Moorthy have been supporters of UW ECE for many years. Ganesh Moorthy earned his bachelor’s degree in electrical engineering from the UW in 1981. He also holds a bachelor’s degree in physics from the University of Bombay in India and an MBA in marketing from the National University in Sacramento. He has served on the UW ECE Advisory Board and was guest speaker at the 2019 UW ECE Graduation Ceremony. Moorthy currently serves as the president and chief executive officer of Microchip Technology, one of the world’s leading providers of semiconductor solutions that enable smart, connected and secure devices. Hema Moorthy was also trained as an electrical engineer, worked at Hewlett-Packard for a number of years and started a Kumon math and reading center in 2010. She holds an MBA from California State University in Sacramento.

“You can’t find a better person than Maryam to be the first recipient of this Professorship,” Ganesh Moorthy said at the event. “It’s incredible the work that she is doing, but most importantly, it’s incredible the impact her work will make for years and years to come on our students and on the community at large.”

The Moorthys have stated that they hope to inspire future holders of this Professorship to be influential in the UW’s efforts to develop the next generation of engineers. Ganesh Moorthy further explained the motivation he and his wife had for establishing the Professorship.

“We named the Professorship after the family because education was something that has been drilled into all of us since we were young. It’s a way that we continue to make ourselves better and make the next generation better,” Ganesh Moorthy said. “We took inspiration from our parents. We tried to provide inspiration for our children. We hope that this continues for generations to come. It’s that inspiration that is behind this Professorship.” 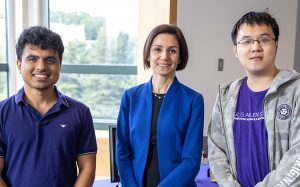 UW ECE Professor Maryam Fazel (center) with UW graduate students Adhyyan Narang (left) and Zhihan Xiong (right) at the investiture. Graduate students such as Narang and Xiong play an important role in the Institute for Foundations of Data Science, where Fazel serves as director and principal investigator.

Fazel’s work as a researcher, educator and director of the Institute for Foundations of Data Science is almost certain to have the sort of far-reaching, lasting effect Ganesh Moorthy described. Her research group’s mission is to take a principled approach to understanding and improving machine learning and automated decision-making methods, which are found in almost every new technology nowadays. For example, artificial intelligence, autonomous driving, robotic applications and recommender systems (such as Google, Netflix and Spotify) all rely on underpinning machine-learning models and algorithms that are too often vulnerable to data corruption, shifts in the operating environment or algorithmic biases. Fazel’s research group and the IFDS seeks to remedy these issues by building a deeper theoretical understanding of how machine-learning models and algorithms function in the real world. Her research has already significantly affected the field of machine learning and control systems, garnering well over 11,400 citations in scholarly publications.

“I would like to say how grateful I am to Ganesh and Hema for their vision and generosity in establishing this Professorship,” Fazel said. “It’s a great thing for our Department, and I’m also very honored to be its first recipient. I’m excited that my students and my group’s research work in the foundations of data science and artificial intelligence will directly benefit from this support. Ganesh and Hema, thank you again for this opportunity.”

Learn more about Maryam Fazel and her research on her UW ECE bio page, and at the Institute for Foundations of Data Science.