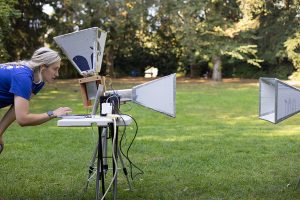 Lead author and UW ECE alumna Zerina Kapetanovic (Ph.D. ‘22), adjusting test equipment on the UW campus. Unlike existing passive wireless and backscatter communication systems, The research team’s prototype does not depend on externally generated or ambient radio frequency signals to send and receive information. Instead, the device uses a byproduct of electrical resistance in its circuitry called “Johnson noise” to enhance energy-efficiency and transmit a wireless signal. Photo by Ryan Hoover | UW ECE

Most types of wireless communication — such as what is found in your phone, garage door opener and keyboard mouse — transmit information back and forth by way of radio waves. Conventional radios generate clean signals that can send large amounts of data over long distances. However, it takes power to generate radio waves, and that can become costly for a device in terms of energy. To help address this issue, researchers in recent years have been developing new and creative forms of passive wireless communication, in which devices send information by reflecting pre-existing radio waves to greatly reduce energy consumption. Devices that use passive wireless communication methods such as ambient backscatter are often built to be battery-free, harvesting the minimal amount of power they need from sources such as sunlight, broadcast television signals or environmental temperature differences.

Now, a University of Washington team has achieved a dramatic step forward in this line of research by being the first in the world to experimentally demonstrate a wireless communication system that retains the benefits of passive wireless communication, while enabling devices to send and receive data without relying on externally generated or ambient radio frequency signals. Their findings were explained in a recent article in The Conversation and published in a paper in the Proceedings of the National Academy of Sciences, a journal that broadly spans the biological, physical and social sciences.

“A big, practical limitation for low-power, passive wireless communication devices is that they depend on radio frequency sources. You can build these devices to be battery-free, but it can sometimes be difficult to use them because of needing to have an RF source or ambient signals nearby,” said Zerina Kapetanovic, lead author of the paper and a recent UW ECE graduate (Ph.D. ‘22). “It limits the application space, whereas I can set up the system we developed anywhere because it’s not dependent on having broadcast television towers in the vicinity.”

Research described in the PNAS paper was part of Kapetanovic’s doctoral dissertation at UW ECE. The project was conducted from 2020 to 2022 with guidance from Joshua Smith, who is senior author of the paper and was Kapetanovic’s adviser in the Department. Smith is the Milton and Delia Zeutschel Professor in Entrepreneurial Excellence and holds a joint appointment between UW ECE and the Paul. G. Allen School of Computer Science & Engineering.

“What is really exciting is that this is a completely new way to communicate,” Smith said. “When most wireless communication systems send information, they have to make a radio wave. So, for example, when I want to send information on my phone, it takes energy out of the battery and puts it into an oscillator. That oscillator connects to an amplifier and then into the phone’s antenna, where a radio wave comes out. So, it takes a lot of power to do that,” he explained. “We don’t have to do any of the things you normally do to make a radio wave. Instead, we send information by controlling some thermal noise within the transmitter. When this noise is connected to the transmit antenna, the receiver sees a larger output signal; when it is disconnected, the receiver sees a smaller signal.”

Kapetanovic and Smith collaborated on this work with Professor Miguel Morales from the UW Department of Physics. Morales is a co-author of the paper, and both Smith and Kapetanovic noted his important contributions to their research.

“I think it was really great having Miguel work on this with us because there’s a lot of interesting things about our system from a physics perspective,” Kapetanovic said. “A lot of what we did was actually related to radio astronomy, and Miguel is an expert in that field. He was able to provide a very different perspective as compared to us to analyze and understand our system.”

Johnson noise as a means for communication 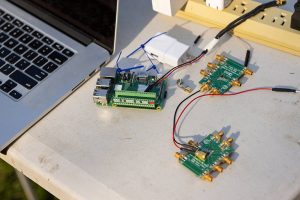 Examples of the team’s prototype, which was developed in the lab of UW ECE Professor Joshua Smith. Photo by Ryan Hoover | UW ECE

The prototype the team developed takes advantage of electronic noise generated by thermal agitation of charge carriers in circuits. This electronic jostling, known as Johnson noise, is present in all electrical circuits, and it is usually considered to be either useless or a nuisance. In sensitive electronic equipment, such as radio telescope receivers, noise can drown out weak signals and is almost always a limiting factor for electrical measuring instruments.

“In general, when we think about noise in wireless communication, it’s often viewed as a problem. It’s interference,” Kapetanovic said. “We’re actually showing the opposite here, that this particular type of noise can be used to enable communication.”

The team’s device selectively connects and disconnects an impedance-matched resistor and an antenna. This modulates microwave frequency Johnson noise emitted by the antenna and enables bits of information to be transmitted and received. The team demonstrated that this method of wireless communication could work at room temperature, transmitting at data rates of up to 26 bits per second and achieving distances up to 7.3 meters. This is admittedly a small amount of data being sent a relatively short distance; however, Kapetanovic and Smith emphasized that it is the first implementation of this form of wireless communication. Both said there is plenty of room for optimization of the technology, which would increase data rates and transmission distance. And even at short-range, the technology holds great potential.

“I think that short-range applications are probably where this method of wireless communication has the chance of greatest impact,” Smith said. “That could be things like implanted electronics for medical purposes, where the key is just to get the data outside the body or applications such as contactless payment or ID cards, where you’re only sending data a short distance.”

Future applications and a new line of research

In the future, environmental monitoring and sensing in remote areas could be an important application of this form of wireless communication, in cooperation with other technologies — for example, improving farm productivity by deploying battery-free sensors that detect and send valuable data such as soil moisture and temperature levels. And in fact, Kapetanovic has already conducted research using other forms of passive wireless communication through the Microsoft FarmBeats program. Another possible application area is the Internet of Things, where battery-free devices that don’t need to rely on pre-existing radio signals could contribute to the design of smart home security systems, appliances, smart lighting fixtures and thermostats. Still another could be stealth communication. Because devices modulating Johnson noise do not rely on pre-existing radio signals for wireless communication and can operate on any frequency, it could be a method used to send information back and forth without being observed.

But perhaps one of the most important things about this new form of wireless communication at this stage is that it opens a new line of research possibilities for engineers and scientists.

“One of the things that I’ve been working on for a long time is creating sensors and other devices that could run forever without batteries, using only harvested power from the environment,” Smith said. “This is something that could very well help make that happen. Plus, I have a page-long list of other research projects I want to do that grows out of this work.”

“I think this is the first step,” Kapetanovic added. “There are other forms of noise that exist in nature, so you could take this work further and perhaps find other noise sources you could use to communicate with. Our work could lead to other, entirely new ways to implement wireless communication, and to me, that’s really exciting.”

Learn more about this research in The Conversation, on Kapetanovic’s website and at Smith’s Sensor Systems Laboratory online.