James Rosenthal (left) and Charlie Kelly deliver a weekly podcast that unpacks a complex science paper that has attracted astonishing or absurd headlines.

Two UW engineering Ph.D. students, ECE’s James Rosenthal and A&A’s Charlie Kelly, co-host the “Paper Boys” podcast, a weekly unpacking of science papers with astonishing or absurd headlines covered in the media. “Early humans hooked up with other species a whole bunch” and “An alien spaceship may have passed by Earth in 2017, Harvard scientists say” are real headlines from respected media outlets. Were these headlines accurate?

Each week, “Paper Boys” presents a science paper covered in the media, then they explore the complex research behind the headlines and break down whether the flashy headline was justified. The result is a fun, engaging but didactic conversation uncovering obscure phenomena.

One of the strengths of the podcast is the fun rapport you two have. How did you meet?

James: We actually met on the first day of grad school. We randomly sat next to each other at an orientation at the library. Our first conversation quickly steered towards outer space, and it was instant friendship after that. Our shared passion for science and exploration was a big driver for starting the podcast.

Charlie: The reason we get along so well on air is that what you hear is only 1% of our actual time spent together. Our friendship was forged over beverages, squash courts, and hiking trails for years before we started the show. People are always surprised we have pastimes together that are completely unrelated to podcasting — like scouring the UW campus for the coolest trees we can find (seriously people, go check out the Brockman Memorial Tree Tour). 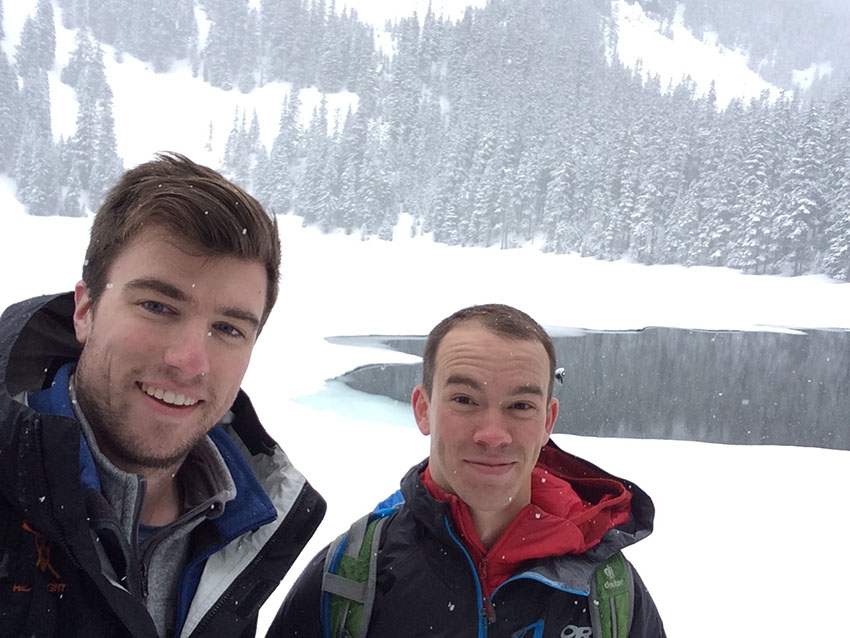 “Our friendship was forged over beverages, squash courts, and hiking trails for years before we started the show.” – Charlie

“Our shared passion for science and exploration was a big driver for starting the podcast.” – James

What was your motivation for this podcast? Was there a particular headline that misrepresented research that made the decision for you?

Charlie: We had been toying with the idea of starting a “journal club” for a while, where the idea was to get together over a beer every week and chat about a paper one of us had read. At the same time, we had a radio show on Rainy Dawg where we pretended to be astronauts and talked about space news a lot. Eventually we realized we could combine the two and have a sort of journal club in radio format, and Paper Boys was born.

James: Another motivation for the podcast was to help our audience see the personal, human element behind research. After reading many popular news articles about science, it is easy to feel distanced from the seemingly cold, objective “researchers” mentioned in the articles. We felt this distance might be one factor contributing to popular distrust of science. In reality, these “researchers” are people who have lives, friends, and families, and who generally want to make the world a better place. By discussing the research in a warmer, more casual way, we hope people can feel more connected to interesting, meaningful science.

“After reading many popular news articles about science, it is easy to feel distanced from the seemingly cold, objective ‘researchers’ mentioned in the articles. We felt this distance might be one factor contributing to popular distrust of science. In reality, these ‘researchers’ are people who have lives, friends, and families, and who generally want to make the world a better place.” – James

Are there episodes or findings that really stand out for you?

James: So many! People I know outside of Charlie are probably sick of hearing me talk about new facts I learned from doing the show. There are of course some papers that simply reinforce an expected outcome (e.g. sleep is important and you should get enough), but every paper introduces some surprising, insightful nuances. If I had to pick off the top of my head though, I would choose the episodes “Is Planet 9 Actually a Black Hole?” and “Can You Prove You’re Human in One Word?”

Charlie:  Another thing that makes episodes stand out is when the audience is really engaged. We had an episode covering the quintessential pop science debate: “Are eggs really bad for you?” That was almost a year ago and we still hear from fans that we ruined breakfast for them.

How do you prepare individually and together for each episode?

Charlie: We decided early on that each episode would have one of us select the paper and research it in-depth, while the other person learns live on air and asks questions. It’s a good format for us because we alternate roles every week, so we can do a lot of the prep work individually before getting together to record. When I’m researching a paper, I personally like to print it out and read it at the IMA — though admittedly I probably look silly trying to use a highlighter on the StairMaster.

Has your process evolved as you’ve gained more experience?

James: I would say our process for reading papers has changed. At the start of grad school, it would take Charlie and I nearly a full week to read through a single research paper. We’d have to go through and find the definition of nearly every other word. Now for a paper on an unfamiliar topic, it might take 1-2 hours to read and take notes. The big epiphany was realizing that all scientific papers have a lot of similarities, in content and structure. Now when we start reading a paper on a completely foreign topic, we can break it down much faster. We just ask ourselves the basics, like “OK, the terminology is different, but how did the authors apply the scientific method? What’s their hypothesis? What are their methods? What did they find?”

Have any authors of the papers you’ve featured contacted you?

Charlie: Actually yes! Occasionally we will share the episode with the authors of the paper we covered and we usually get a great response. We’ve also had authors tweet at us out of the blue, which is exciting because it means someone else shared it with them.

Challenge! Write a headline-worthy of Paper Boys for each other’s research.

James: Haha nice, Charlie! That gives me more credit than I deserve, but I’ll take it. Here is my best news headline summary of Charlie’s research: “Plasma aerocapture technology could open unexplored reaches of the solar system — and the possibility of discovering alien life.”