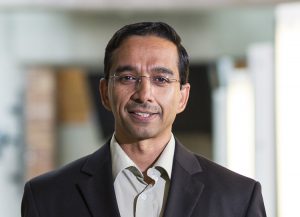 Rajesh Rao, who is the C.J. and Elizabeth Hwang Endowed Professor in the Paul G. Allen School of Computer Science & Engineering and the UW Department of Electrical & Computer Engineering, recently received a two-year grant through the Weill Neurohub. The grant will allow Rao and his collaborators to develop a new type of brain-computer interface, called a “brain co-processor,” which uses artificial intelligence to restore brain function. Photo by Mark Stone, University of Washington

Rajesh Rao, who is the C.J. and Elizabeth Hwang Endowed Professor in the Paul G. Allen School of Computer Science & Engineering and the UW Department of Electrical & Computer Engineering, recently received a two-year grant through the Weill Neurohub. The grant will provide Rao and his collaborators with funding to develop a new type of brain-computer interface, which will be capable of restoring injured neural circuits in the brain. The interface, called a “brain co-processor,” couples artificial intelligence (AI) algorithms, such as artificial neural networks, with their biological counterparts in the brain, allowing the co-processor and brain to learn alongside each other. This innovative approach offers a new way to heal the brain, restore function and even augment the brain’s ability to process information.

Rao, who is also co-director of the Center for Neurotechnology, will be collaborating with professor Anca Dragan, an artificial intelligence and robotics expert at UC Berkeley and Dr. Karunesh Ganguly, a specialist in neurological rehabilitation at UC San Francisco. The team will work together to develop this novel conceptual framework and test its viability in the lab.

“This is the first time that the concept of a brain co-processor will be tested in actual brains using animal models,” Rao said. “Recent advances in AI, especially in artificial neural networks and in neuroscience make this an opportune time to embark on such a project. We now have technologies that can record from and electrically stimulate neurons in the brain at a large scale in precise ways. We couldn’t do that before.”

A new type of brain-computer interface

Contrary to what many people might think, brain-computer interfaces have been around for a long time in research lab settings, pioneered in the 1960s by individuals such as UW professor Eberhard Fetz. Scientists and engineers recognized the potential of these devices early on. And they have been working steadily toward developing brain-computer interfaces capable of healing the brain after injury and augmenting its function.

One of the main difficulties researchers face in regard to this ambitious goal is that the brain is a dynamic, ever-changing system. The approximately 100 billion neurons that make up the human brain don’t stay in one place over time. They move and sway, much like tree branches in a wind, while growing and forming new connections rapidly and continuously. In recent years, scientists and engineers have made great strides, improving the reliability and precision of neural interfaces and deepening our understanding of how the brain works. However, forming a robust interface between the brain and a device capable of assisting a user in real life with complex tasks and goals such as operating a touch-sensitive prosthetic, or recovering from spinal cord injury or stroke, is still a major challenge.

To address this challenge, Rao and his Weill Neurohub team are developing and testing the model Rao has built for a brain co-processor. Their approach differs from traditional brain-computer interfaces in that it uses deep (machine) learning or an artificial neural network to learn and adapt alongside the brain. The brain co-processor accomplishes this feat by simultaneously recording information from neurons, “reading” the current state of the brain, while at the same time pulling data and feedback from the external environment that is relevant to the purpose for which it is intended. The device processes all of this information, learning and adapting through an “emulator network” — a system within the co-processor that uses reinforcement or error feedback to learn in much the same way as the human brain does — to accomplish a task or goal shared by both the user and the device. That task or goal could be anything from helping the user operate a brain-controlled prosthetic arm, bridge damaged neural pathways after a spinal cord injury, or strengthen neural connections to recover from a stroke.

“Overall, this is a very broad way of having a device interact directly with the brain, using AI as a way to mediate this interaction,” Rao said. “Ultimately, what we’re doing here is augmenting the capacity of the brain to process information.”

Brain co-processors could be used for many purposes, including operating prosthetics, restoring vision in the blind, improving function after stroke or spinal cord injury or treating psychiatric disorders. This example illustrates how a traditional brain-computer interface (BCI, top illustration) for control of a prosthetic limb uses neural recordings to interpret the user’s intention to move the prosthetic and then activates the device accordingly. In contrast, a brain co-processor for control of a prosthetic limb (bottom illustration) uses artificial intelligence algorithms, such as artificial neural networks, to combine data from touch-sensitive sensors on the prosthetic limb (external information source), with neural recordings from the brain. The brain co-processor then computes appropriate electrical stimulation patterns for the brain as well as commands for the prosthetic limb (the external actuator), providing a richer sensory experience for the user and a finer level of control. Illustration from the “Handbook of Neuroengineering,” N.V. Thakor, A. Garg, S. Nargund, C. Nuan (eds.), 2021

Assuming that the research team’s experiments verify their initial computer simulations, brain co-processors could set the standard for a new class of brain-computer interfaces, helping to move these devices out of the lab and into real-world applications. And the possibilities for human impact are vast. Brain co-processors could facilitate new and better treatments for a wide array of neurological conditions and disorders that affect physical mobility such as Parkinson’s disease, epilepsy, spinal cord injury and stroke, as well as a host of psychiatric conditions such as depression, post-traumatic stress syndrome, and bipolar illness. In theory, anything brain-related could potentially stand to benefit from a brain co-processor.

With the above in mind, augmenting a healthy human brain with a brain co-processor also becomes a very real possibility. How would you like to improve your memory, learn a second language in half the time it would normally take to learn or perhaps even expand your vision beyond the visible spectrum? Although this may sound like science fiction, Rao’s project will contribute toward building the foundational knowledge needed to make these things a reality.

And as one might imagine, devices this powerful come with an array of ethical issues and considerations such as individual identity and agency, neural security and privacy, and social equity. Rao takes these issues seriously and describes them in detail in a recent chapter in the “Handbook of Neuroengineering.”

“Some of the most important questions are ethical ones that, unfortunately, the field of neurotechnology has not paid as much attention to as it should in the enthusiasm to surge ahead with whatever the next big breakthrough is,” Rao said. “I think one of the most important contributions from our Center for Neurotechnology has been that we’ve always put ethics up front, and we’ve made sure that it is part of the design process for any neural device that we build. The design of brain co-processors is no exception.”

Rao said that he sees development of brain co-processors as a long-term, multigenerational effort full of opportunities for collaboration because of the complexity of the undertaking. Besides his current collaborators at the UW, UC San Francisco and UC Berkeley, he will collaborate on this line of research in the future with members of the neuroethics research team at the Center for Neurotechnology and UW ECE faculty members such as Chet Moritz, Amy Orsborn and Azadeh Yazdan, who are all currently involved in other Weill Neurohub projects and related brain-computer interface research and development.

Rao is also planning to bring one or more UW ECE graduate and undergraduate students on-board to assist with the project, and he noted the opportunities available for students across multiple disciplines.

“I’m really excited about this research area, and I think there’s lots of interesting, open questions that require input from all the smart, young minds out there interested in neural engineering,” Rao said. “In particular, this is a great area for students to get involved in because of the novel combination of artificial intelligence with biological intelligence. I think there are many opportunities for students with diverse backgrounds to make significant contributions due to the multidisciplinary nature of research on brain co-processors.”

To learn more about this Weill Neurohub project and related work at the Center for Neurotechnology, contact Rajesh Rao.