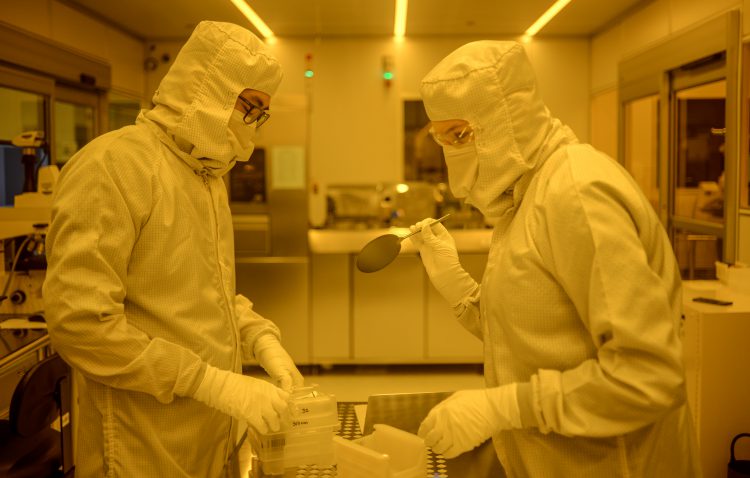 “We were thrilled with the range of novel proposals that we received from researchers across the Pacific Northwest,” said NanoES director Karl Böhringer, who is a professor of electrical & computer engineering and of bioengineering at the University of Washington. “We look forward to seeing the outcome of these projects and their impact.”

This seed grant program enables first-time facility users both inside and outside the UW to build and characterize prototypes, obtain preliminary results and conduct proof of concept studies.

The awardees for this cycle are:

Abstract: 38 million people live with human immunodeficiency virus (HIV) around the world and 25 million of them take daily antiretroviral (ARV) drugs to extend their length and quality of life. However, >25% of patients are at risk of treatment failure and death because of inadequate medication adherence and inter-individual differences in drug pharmacokinetics. ARVs are typically monitored using liquid chromatography tandem mass spectrometry (LC-MS/MS), but this is centralized, expensive, and unavailable at the point of need (e.g. doctor’s office, patient’s home, or event setting). A rapid and user-friendly test for measuring ARVs would actionable information to prevent treatment failure and improve HIV care outcomes.

We recently developed the enzymatic REverSe TRanscrIptase Chain Termination (RESTRICT) assay for measuring ARVs in the nucleotide reverse transcriptase inhibitor (NRTI) class used in >90% of HIV treatment regimens. RESTRICT is rapid (<30 min) and accurate compared with LC-MS/MS but still requires 4 liquid handling steps and timed user intervention. We propose the development of an autonomous microfluidic device – with self-propelled and self-regulated encoded by microchannel surface geometry and chemistry – to automate the RESTRICT. Our RESTRICT chip will enable rapid and user-friendly therapeutic monitoring of ARVs at the point of need including in low-resource settings.

Abstract: Trapped ions are a leading platform for quantum information processing due to their high fidelity operation. Moreover, microfabricated traps promise scalability as multiple trapping regions can be fabricated on the same chip. However, these microfabricated traps have been plagued by electric field noise which heats up the quantized motional modes of the ions and decreases gate fidelity. There have been many studies to elucidate the exact cause of this electric field noise, and while there is still not a unified theory which explains all the data, the consensus is that the noise arises from defects in the electrode material. These electrodes are generally made from evaporated metal films which are disordered in the bulk and on the surface. Here, we propose to instead fabricate traps out of doped Silicon which can provide conductivities similar to evaporated metal while being completely crystalline. Our hypothesis is that these traps will exhibit lower electric field noise at the ion, allowing for high fidelity operations even as ions are trapped closer to the surface. There have been demonstrations of such doped Silicon traps, and indeed the measured electric field noise was comparable to the best reported in the literature. However, the noise measurement was not the focus of these studies, was not studied systematically, and was likely dominated by technical noise on the dc voltages instead of the surface induced noise.

Here, we propose to fabricate traps directly from doped Silicon which will have two advantages: (1) the crystalline structure of Silicon will eliminate disorder that is thought to be the leading cause of electric field noise and (2) fabrication techniques developed for MEMS technology will allow electrode design that is unconstrained by fabrication, enabling increased trap depth and increased ion-electrode distance simultaneously.

Abstract: High entropy oxides (HEOs) are a new class of materials recently discovered and synthesized in 2015. HEOs are essentially stable hybrids of different metal oxides, with material properties somewhere between the constituent oxides, or occasionally entirely new properties not present in the constituents. One unique quality of HEOs are that their chemical compositions can be adjusted, either by switching out what elements are present or adjusting the ratios of the different elements, allowing for the fine-tuning of material properties. The prospect of high entropy perovskite oxides is very promising, as traditional perovskites are commonly found in the energy and microprocessing sectors such as in solar cells, batteries, and semiconductors; high entropy perovskite oxides have the potential to further enhance the performance of these devices.

Currently, the largest limitation of HEO are that their fabrication processes are very time and energy intensive. The most common HEO synthesis method involves mixing and milling constituent powders for multiple hours, followed by a multiple-hour sintering process at around 1500°C. As a result, the development and scale-up of new HEOs has been slow. One new HEO fabrication method currently being explored by our lab involves solution combustion synthesis; this method reduces the formation temperature of HEOs down in the range of 200°C, allowing for much more efficient fabrication. To initiate the combustion reaction, we use radio frequency (RF) energy efficient heating method developed by our lab that allows for out-of-oven synthesis of HEOs in a matter of seconds rather than hours. This approach has been successfully implemented for non-perovskite HEOs. With this Seed Grant, the Vashisth Research Lab hopes to characterize these HEOs and high entropy perovskites being fabricated in our lab to characterize and understand their structure resulting from our novel processing method.

Abstract: A critical challenge in solar fuels and photocatalysis technologies is charge transfer management. Quantum dots have been used extensively in photocatalytic hydrogen evolution and other related solar-to-fuel applications. However, these systems suffer from low quantum efficiencies and turnover numbers due rapid radiative recombination on the nanosecond time scale and slow photocatalyst regeneration with reliance upon sacrificial, molecular donors. This work explores the synthesis and implementation of heterostructure nanomaterials for solar energy conversion. Development of novel type II, anisotropic heterostructure nanomaterials, such as dot-in-rods or seeded tetrapods, will enable higher efficiency photoredox reactions and unlock opportunities for visible light mediated CO2 reduction and alkyl cross-coupling. CuAlS2/ZnS is composed of biocompatible, earth-abundant elements and heterostructures of this composition exhibit a rare, staggered, type II band edge offset of nearly 1 eV at both the conduction and valence bands. Previously, Janus-type CuAlS2/ZnS nanoparticles demonstrated 20% solar conversion efficiencies for bicarbonate to formate reduction.

Our work intends to develop synthetic protocols for new, elongated CuAlS2/ZnS nanorods and tetrapods with improved photoredox capabilities. Once synthesized, these nanostructures will be incorporated onto electrodes to use an applied bias to quench holes in photoexcited CuAlS2/ZnS and improve photocatalyst turnover rate. Hole quenching is the rate limiting step photoreduction and prior hole quenching efforts via electron transfer have been challenged in CdSe by rapid back electron transfer from the reduced substrate and radiative recombination that occur on similar timescales to electron transfer from an applied bias. We expect the slower rates of back electron transfer and radiative recombination in type II, anisotropic CuAlS2/ZnS heterostructures will enable more efficient hole quenching via electron transfer. This demonstration would serve as a leading study in high solar conversion efficiency photoredox systems and feature a novel photocathode to serve as a foundation for our further development of new nanomaterial catalyzed photoredox processes.

Information about future seed grant opportunities through the Northwest Nanotechnology Infrastructure can be found on the NanoES website.