Not just phoning it in: Shwetak Patel honored by Georgia Tech and Business Insider

Not just phoning it in: Shwetak Patel honored by Georgia Tech and Business Insider for contributions to low-power sensing and mobile health innovation 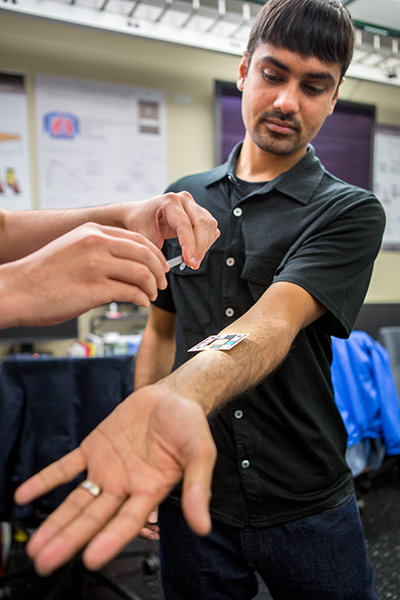 University of Washington professor Shwetak Patel has earned a place in the Georgia Tech College of Computing’s Hall of Fame and a spot on Business Insider’s recent list of “30 leaders under 40” who are changing health care for his innovative work combining low-power sensing, signal processing and machine learning for applications ranging from non-invasive disease screening to monitoring appliance-level energy consumption. Patel, who holds the Washington Research Foundation Entrepreneurship Endowed Professorship in the Paul G. Allen School of Computer Science & Engineering and the UW Department of Electrical & Computer Engineering (UW ECE), is also a serial entrepreneur and director of health technologies at Google Health and Fitbit Research.

Patel himself has been largely responsible for transforming computing’s contribution from staid billing software to pocket-sized personal health monitor. Evidence of that work is strewn around the Allen School’s Ubiquitous Computing Lab on the UW’s Seattle campus, where stacks of mobile phones and coils of charger cable jostle for space with a variety of 3D-printed accessories, camera color correction cards, the odd blood pressure monitor, and even a life-sized plastic baby doll. (That last one is used for demonstrating an app for detecting infant jaundice.)

Patel’s drive to “democratize diagnostics,” as he once described it, stemmed from his realization that the proliferation of smartphones and their increasingly sophisticated sensing capabilities had the potential to improve health care outcomes for millions of people around the globe. He and his students began thinking about how they could employ these on-board sensors — such as the phone’s camera, microphone, accelerometer, and gyroscope — to augment traditional in-person care by enabling early detection and intervention. They also saw an opportunity to empower people to monitor their health on an ongoing basis, without the need for repeated trips to a clinic or access to specialized equipment, with the help of a device they already carry around with them.

Working with clinicians at UW Medicine, Seattle Children’s and others, Patel and his team developed apps for assessing lung function in people with respiratory illnesses, detecting jaundice in babies and adults, measuring blood hemoglobin in people with anemia — to name only a few. Patel and his collaborators started a company, Senosis Health, to commercialize their research. After Senosis was acquired by Google, Patel began splitting his time between the UW and the company in order to lead the latter’s mobile health efforts. Patel and the Google Fit team have since released tools for measuring heart rate and respiratory rate to permit users to monitor their general health and wellness with the aid of their smartphone camera that was based in part on research originating in his UW lab.

Following the emergence of SARS-CoV-2 early last year, Patel and his lab pivoted to applying what they had learned from their work on those earlier apps to focus on tools that could aid in the pandemic response. For example, Patel and his students have been working on smartphone-based tools for monitoring symptoms such as cough and developed a system to enable contactless measurement of a person’s vital signs via online video. To aid in the community-level response, he also collaborated on the creation of RDTScan to support accurate interpretation of rapid diagnostic test results at the point of capture with the help of a smartphone and demonstrated how air filtration systems on public transit could be used as passive sensing systems to detect viral spread.

“Computing is playing a critical role in the actual discovery of new interventions in health outcomes.” —Shwetak Patel

Patel’s efforts to advance mobile health sensing were a natural progression from his visionary work on low-power sensing that stretches back to his student days at Georgia Tech. His first foray into the technology was as an undergraduate working on the Aware Home, a demonstration project that sought to imagine the connected home of the future. After earning his bachelor’s, Patel remained in Atlanta to pursue his doctorate, during which time he developed a system for measuring residential energy and water consumption by individual appliances and fixtures from a single point in the home — research that Patel continued to refine and expand upon following his arrival at the UW. He and his Georgia Tech collaborators started a company, Zensi, to commercialize that work which was subsequently acquired by Belkin.

Next, Patel and his students zoomed out from looking at individual appliances to monitoring the entire home via an ultra-low-power sensing system known as SNUPI, short for Sensor Nodes Utilizing Powerline Infrastructure. SNUPI consisted of a network of low-power sensors that transmitted data about a building’s condition — for example, increased moisture level in the walls — via the structure’s electrical circuit. The system was designed to function for decades without having to replace the batteries. Patel and his team created another spinout company, SNUPI Technologies, to commercialize a residential whole-home hazards monitoring platform under the name of WallyHome that was later acquired by Sears.

Through the years, Patel and his students have also advanced innovations in motion tracking, object detection, wearable technologies, hyperspectral imaging, and more. Throughout his career, he has earned more than two dozen Best Paper Awards and multiple “test of time” awards at the field’s preeminent conferences focused on ubiquitous computing, mobile computing, pervasive computing and human-computer interaction.

Patel’s induction into his alma mater’s Hall of Fame and the Business Insider recognition are the latest in a string of accolades recognizing the wide-ranging impact of his work. Previously, he was named a Fellow of the Association for Computing Machinery and received the organization’s ACM Prize in Computing for mid-career contributions to the field. Patel is also a past recipient of a MacArthur Foundation “Genius” Award and a Presidential Early Career Award for Scientists and Engineers (PECASE).

Read the Georgia Tech College of Computing Hall of Fame citation here, Patel’s “30 under 40” profile in Business Insider here, and a related article on his work on health care technologies at Google here (paywall).