University of Washington professor Shwetak Patel is the recipient of the 2018 ACM Prize in Computing for contributions to creative and practical sensing systems for sustainability and health, the Association for Computing Machinery or ACM announced today. Patel holds a joint appointment in the Department of Electrical & Computer Engineering and in the Paul G. Allen School and leads a team at Google. 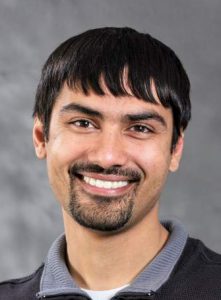 The ACM Prize in Computing recognizes early-to-mid-career computer scientists whose research contributions have fundamental impact and broad implications. The award carries a prize of $250,000, from an endowment provided by Infosys Ltd. Patel will formally receive the ACM Prize at ACM’s annual awards banquet on June 15, 2019 in San Francisco. This is ACM’s second most prestigious award in all of computing (after the Turing Award – known as the Nobel Prize in Computing).

Despite the fact that he is only 37, Shwetak Patel has been significantly impacting the field of ubiquitous computing for nearly two decades,” said ACM President Cherry M. Pancake. His work has ushered in new possibilities in many applications of ubiquitous computing for sustainability and health. Advances in sensors will be central to the ongoing Internet of Things revolution, and applications which allow individuals to monitor their health with smart phones could revolutionize health care—especially in the developing world. Shwetak Patel certainly exemplifies the ACM Prize’s goal of recognizing work with ‘fundamental impact and broad implications.”

Patel’s research closed the gap between science fiction and reality in many applications in ubiquitous computing for sustainability and health.

“Shwetak’s extensive contributions in sustainability and health through ubiquitous computing are at the forefront of innovation,” said Radha Poovendran, professor and chair of ECE. “His ability to turn his research into real-world devices that have revolutionized the way we use sensors, while staying true to his commitment as an educator, shows his incredible ingenuity and promise. He is truly deserving of this high honor. Shwetak is an incredible scholar and we are fortunate that he chose UW as his intellectual home.”