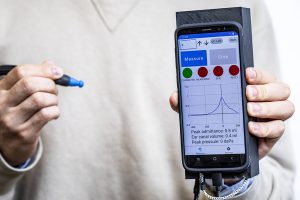 UW ECE Adjunct Associate Professor Shyam Gollakota and UW ECE doctoral student Ali Najafi are part of a multidisciplinary UW research team that has developed a system for turning a smartphone into an a device for testing middle ear function.

Adapted from an article by Kristin Osborne | UW CSE

According to the World Health Organization, more than 430 million people around the globe live with a disabling hearing loss — including 34 million children, the majority of whom suffer hearing loss that is due to preventable causes. Nearly 80% of people with disabling hearing loss live in low- or middle-income countries where they may encounter barriers to routine medical care, which includes screening for ear disorders to support early detection and intervention.

Tympanometry is a test of middle ear function that can be used in conjunction with otoscopy and other tests to diagnose middle ear disorders that, if left untreated, could lead to complications such as permanent hearing loss. Although it is a relatively simple test to perform, there are barriers for widespread use in resource-constrained communities — not only are they not designed for portability, but they carry a price tag ranging from $2,000 to $5,000 each.

In a paper published recently in Nature Communications Medicine, researchers at the University of Washington Department of Electrical & Computer Engineering, the Paul G. Allen School of Computer Science & Engineering, UW Medicine and Seattle Children’s present a lightweight alternative to conventional tympanometry devices that is also lighter on the wallet. News of the team’s system, which turns a smartphone into a handheld tympanometer, should be music to the ears of those working in public health.

“Conventional desktop tympanometry is expensive, bulky, and requires a source of wall power, which makes it less than ideal for use in mobile clinics and rural communities. Consequently, in some areas, people may have to travel long distances to obtain a test — if they are able to travel, that is,” said lead author Justin Chan, a Ph.D. student in the Allen School. “Our open-source system is inexpensive, portable, easy to use, and works with any Android smartphone.”

During tympanometry, a probe is inserted into the ear canal to alter the air pressure and measure the mobility of the tympanic membrane and ossicular chain. The resulting tympanogram is analyzed to determine if there is a buildup of fluid behind the eardrum — also known as middle ear effusion — or other conditions that may require treatment. 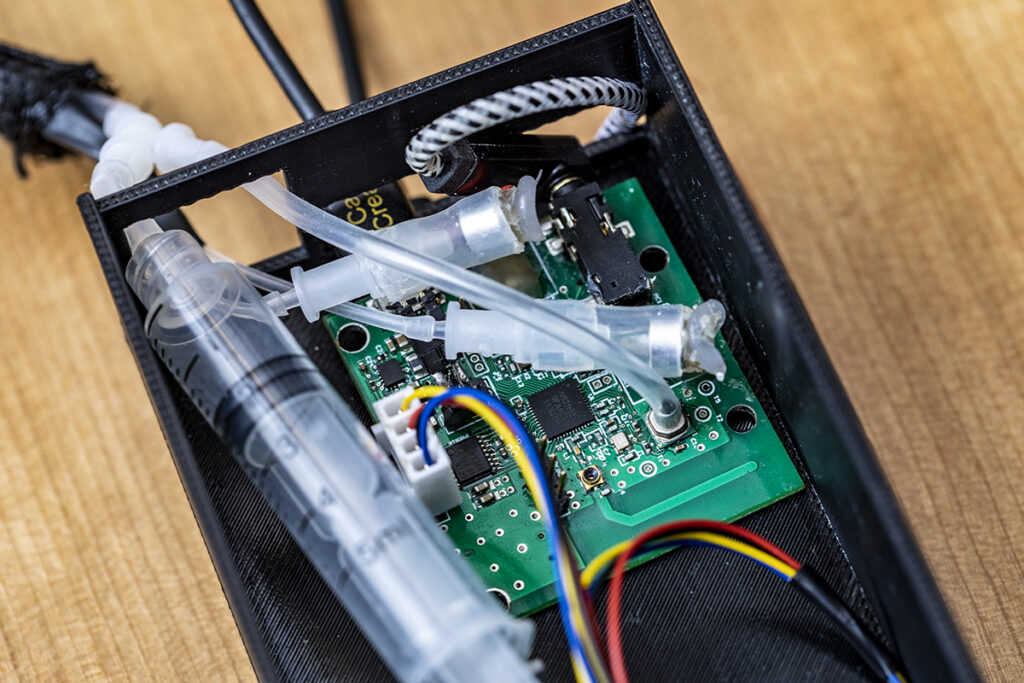 The electronic components of the tympanometry device are encased in a 3D-printed housing and connected to the smartphone via a headphone jack.

The UW-designed system follows a similar approach, albeit packaged in a smaller form factor. A rubber-tipped probe for insertion into the ear canal is connected to a 3D-printed housing that contains the electronic components, which are connected directly to the smartphone via a headphone jack. Those components include a printed circuit board with a tiny speaker and microphone that sends and receives the audio signal, and a stepper motor connected to a syringe and plunger for altering the air pressure inside the ear canal during the test.

When the probe is inserted into the patient’s canal, the smartphone software automatically detects when a seal is established. At that point, the motor automatically — and gently — moves the plunger of the syringe, guided by feedback from an onboard pressure sensor, while the microphone emits a 226 Hz audio tone into the canal. Once the test cycle is complete, the onboard microcontroller instantly transmits the recorded acoustic reflections and pressure data to the smartphone via a built-in wireless Bluetooth radio to generate a tympanogram in real time.

The software can be programmed on the smartphone to adjust testing parameters such as pressure limits, pressure speed, audio frequency and volume, and the entire hardware configuration, minus the smartphone, can be assembled for around $28. The team is making the code freely available to anyone interested in building their own device.

“We designed our system to be safe and comfortable for the patient as well as economical and easy to use. For example, the probe rests lightly yet securely in the patient’s ear without any force applied, and it’s compatible with the same rubber ear tips already used with conventional tympanometers,” noted co-senior author Shyam Gollakota, adjunct associate professor in UW ECE, director of the Networks & Mobile Systems Lab and the Torode Family Professor in the Allen School. “We also built in a fail-safe mechanism — which we haven’t yet needed — that will automatically terminate the test in the unlikely event of a pressure sensor malfunction to avoid large changes in pressure within the ear.”

The researchers evaluated the system on a group of patients scheduled to undergo tympanometry with audiologists at Seattle Children’s. The patients, who were between one and 20 years of age, were each screened using the smartphone system and a commercial tympanometer. The audiologists tested a total of 50 patient ears. A separate panel of audiologists were then asked to classify each of the 100 tympanograms generated by the tests into Liden and Jerger classifications — a scale used to describe the level of mobility of the tympanic membrane that could indicate a middle ear disorder — to compare how the smartphone-based test measured up to the existing standard. 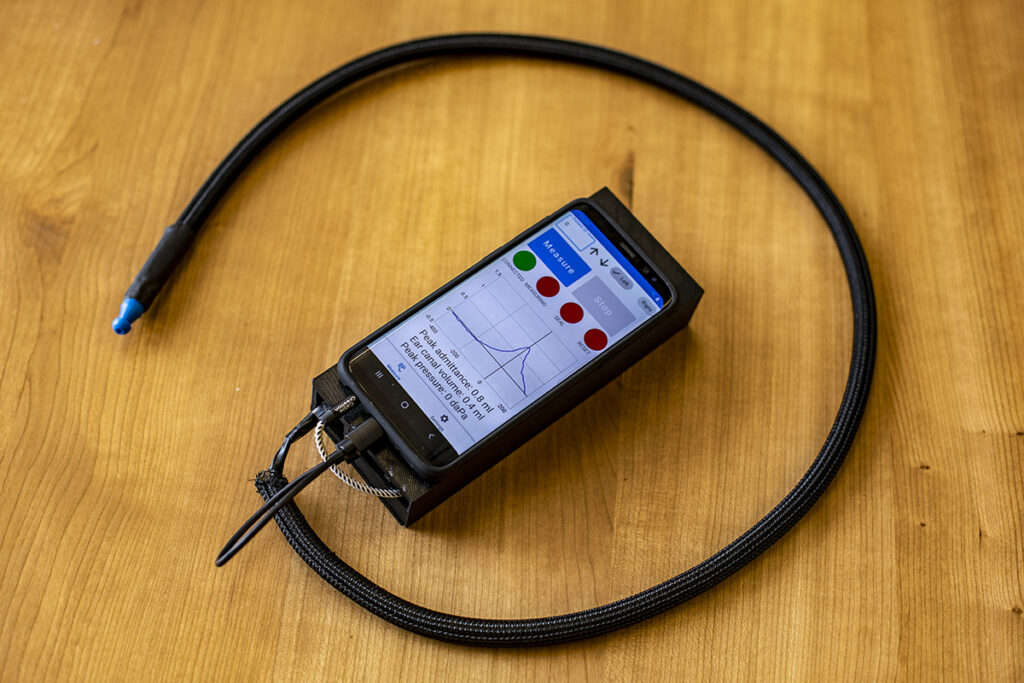 The tympanometer, minus the smartphone, can be assembled for a material cost of around $28. The hardware design and software code are open-source and freely available.

“For the clinical study, we directly compared the results of our smartphone-based tympanometry to the commercial device,” explained co-senior author Dr. Randall Bly, an assistant professor in UW Medicine’s Department of Otolaryngology – Head and Neck Surgery and a pediatric otolaryngology specialist at Seattle Children’s. “There was significant agreement — roughly 86% — between the results of the two screening methods. Most importantly, when there was an abnormal finding such as a Type B tympanogram, there was 100% agreement. Our goal was to develop an accessible device that can accurately assess the middle ear, providing clinicians critical diagnostic information. These results show promise towards achieving this goal.”

Additional studies will be needed to determine efficacy for screening infants under one year of age.

All photos: Dennis Wise/University of Washington