The impact of neurotechnology 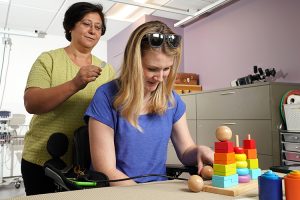 Jessie Owen (right), who has a spinal cord injury, spoke at a recent roundtable about her decision to participate in a research study led by UW ECE senior postdoctoral researcher Dr. Fatma Inanici in the lab of UW ECE associate professor Chet Moritz. This study was funded by the Center for Neurotechnology, which Moritz co-directs and of which Dr. Inanici is a member. Owen described what the experience was like and how neurotechnology has impacted her life. In this photo, Dr. Inanici is applying small patches that will deliver electrical currents on the surface of the skin, over the injured area in Owen’s neck. This electrical stimulation helps the brain to reestablish connections with nerves in the spinal cord. 2018 photo by Marcus Donner

At the age of 27, Jessie Owen was in a devastating car accident that left her with a severe spinal cord injury. She lost much of the function in her hands, arms and legs, and she was diagnosed with central spinal cord syndrome. Her brain’s ability to send and receive signals to and from the parts of her body below her neck was severely impaired. She had to take a leave of absence from her job as a teacher, and she has since been dependent on a wheelchair and caregivers for day-to-day living.

In 2018–19 she participated in a groundbreaking research study led by UW ECE senior postdoctoral researcher Dr. Fatma Inanici in the lab of UW ECE associate professor Chet Moritz. This study was funded by the Center for Neurotechnology, which Moritz co-directs and of which Dr. Inanici is a member. In the study, the research team used a device provided by the Center’s industry affiliate Onward to apply noninvasive, electrical stimulation to the site of Owen’s spinal cord injury. This was aimed at improving her hand and arm function. Owen experienced significant functional gains as a result of participating in the study, which enabled her to live much more independently.

Owen spoke at the Spring 2021 CNT End-user Roundtable, which is a space for CNT students, faculty and staff to learn from people with disabilities and potential end users of neurotechnology. The event was organized by CNT Associate Director of Diversity Scott Bellman and moderated by Moritz. Owen took questions from the audience about her decision to participate in the study, what the experience was like for her and how it has impacted her life.

Below this video, which shows how Owen benefited from participating in the study, are some questions from the Roundtable audience and Owen’s responses, lightly edited for clarity.

Welcome to the CNT End-user Roundtable, Jessie! We appreciate you taking the time today to be with us.

Thank you! I’m happy to be here. So, let me tell you a little bit about how I got to be here. At the very end of December 2012, I was in a car accident going over Highway 2 here in Washington. A tree fell on our car, and I sustained a severe spinal cord injury. I broke my neck at the C3 / C4 level. I went to Harborview Medical Center, and I was at Harborview for three to four months. By the time I left, I still had not gained enough function back to drive a power wheelchair with my hand. I was still driving it with my chin.

And then, I got into a skilled nursing facility because I had some broken bones, and I had some other things that needed to heal. For about two years after that time, I did exercise therapy the best I could. I was able to go from a chin drive to a hand drive on my wheelchair. And I did learn to stand, to get up from chairs and transfer [from one seat to another], but my hand function was still pretty low.

I have central spinal cord syndrome, so my legs tend to work a little bit better than my arms, which was great in some ways but frustrating in others. So, I was living with a friend at the time as I continued exercise therapy. I stayed stagnant in my recovery for about two years. I learned to walk a little bit with crutches, but I was definitely using my power wheelchair all the time because it’s not like I could open a door, or grab things, or cook or any of those things. 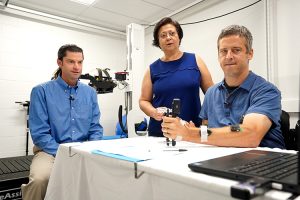 Moritz (left) and Dr. Inanici (center) observe as Jon Schlueter (right), a participant who took part in the same study as Owen, measures grip strength by squeezing the device in his hand. Schlueter has sensors on his arms (black cases) to measure his arm muscle activity during the task. 2019 photo by Marcus Donner

What brought you to the study?

I strongly believe that if we want to see change in the spinal cord community and in science, I need to be an active participant. And so over the years, I participated in some studies whenever they came up. When this one with Chet and Fatma came up, I met with them, and they said I might be a good candidate because I had some function in my hands, even though I didn’t have great function.

What did you expect from the study?

Honestly, I didn’t expect a lot out of it. We just don’t know enough scientifically about how to treat spinal cord injuries, so I thought that it was just going to be a “feel good” experience for me because I was doing my part to help advance science. It was about two years ago when I participated in this study, and I experienced way more results than I anticipated.

In that time, I was able to go from living with a friend to buying my own house, to living independently, to receiving at least 50% less caregiving. My hand function is still not 100%, it’s not, but it has improved enough to allow me to do a lot of different things, and it has made a significant impact in my life, and that is why I’m here. 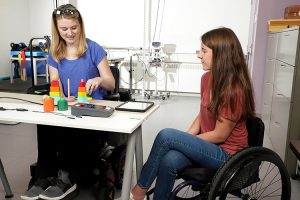 Could you give us some examples of some things that you couldn’t do before the study but that you can do now?

Yeah, you know, there are so many of them. One is that I can cook now. I still don’t take anything out of the oven (that’s pretty scary), but I can do just about anything on the stovetop. I feel much more comfortable using a knife to cut something because even though my right hand is still pretty ridiculous, it’s open enough that I can stabilize an onion, while I carefully cut on the other side.

I can tie my shoes. I can walk my dog easier because I can clip the leash on him. I can take pictures on my phone. I can actually open my hand and take pictures on my phone without it being a huge struggle. I started a journal, and now I write in it every day, about three to five sentences. That’s something that I could maybe do before the study, but it was so tedious. It still takes me longer than the average person, but it’s not so painful that it’s not enjoyable. I take my time, and I like writing.

Another big one is that I’m a teacher, and before the study, I really struggled with figuring out how to teach without being able to write very well or use the technology because my fingers weren’t working. Now, I can point to things better, I can pick stuff up and write more quickly. I feel more confident as a teacher because I have just that little bit more hand function that allows me to do more.

Do you still receive spinal stimulation? If not, were you able to keep the functional gains you made in the study?

I haven’t received any additional stimulation in the two years since the study. I would say that about 90% of my functional gains remain. I have a lot more hand function in my left hand. I can still keep my right hand open, and I can carefully grasp something with it. The progress I’ve made has sustained. I definitely haven’t gone down significantly, maybe a tiny bit right after the study ended, but I still have enough function for me to live as independently as possible. I’m still receiving 50% less care than I was before. I’ve honestly just been a lot happier. You’re happier when you have independence.

When you start out with very little function, even regaining 30% more function at a very low level means a huge deal, so it’s been really meaningful for me to be able to keep the gains that I’ve made. 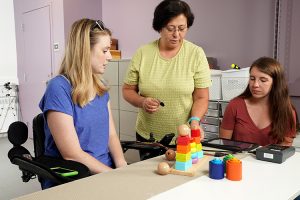 What advice would you give to those considering enrolling in study similar to this one? (Read this UW News article for a more complete description of the study.)

Honestly, I would say to do it. There’s no downside to this. It seems that the side effects are so minimal. I had super success with it, but even if you don’t, you’re not going to get worse. This is a huge opportunity, and it’s simple, it’s easy, and it doesn’t take a lot of time to set up.

Do you have any closing thoughts?

I’m really honored to be in a room with such hardworking and smart and dedicated individuals who are willing to spend time in their careers to make people’s lives better, and you do. You made a big impact on my life and how I get to live. I’m really grateful for the work that you do, and I’m happy to help. I really hope that this technology expands and becomes available to everyone and that we continue to take this as a stepping-stone and go even further with it.

Learn more about Owen’s personal experience in the research study in this article. More information about the study is available at UW News, on the Restorative Technologies website and in this associated research paper.