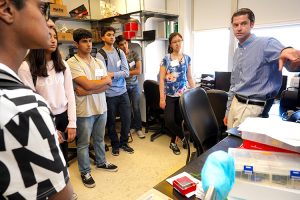 Adapted from a story by Wayne Gillam, Center for Neurotechnology

How can people address racism, sexism, xenophobia and other forms of oppression if they can’t identify when it happens? These and other forms of discrimination can be nuanced and aren’t always obvious to everyone. Sometimes, instances of oppression commonly experienced by underrepresented students can be unintentionally overlooked; however, the impact can be deep and damaging.

Earlier this year, the Center for Neurotechnology (CNT) partnered with Theater for Change UW, with support from the National Science Foundation, to build skillsets necessary for an inclusive and respectful environment. Together, they created an interactive performance presented as a workshop for CNT faculty, students and staff, which was designed to unearth and reveal nuanced forms of discrimination that often go unnoticed.

“Theater for Change UW allows participants to see and feel the impact of harmful interactions in real time and to practice enacting more just outcomes.”

Here is an excerpt from the interactive performance Moritz, Yazdan and Griggs participated in:

Amalia, a graduate student from Mexico, is frustrated, angry and confused. She doesn’t feel seen or heard by her professor or lab colleague, who are both white. They talk past her, mispronounce her name, exclude her from key assignments and tend to assign her menial tasks. To add insult to injury, her name was recently left off as co-author of a published research paper to which she made a significant contribution.

She is fed up and questions herself. She wonders if what she perceives is real. Are her colleagues ignoring and belittling her because of her race, nationality or gender, or is she perhaps not as accomplished as they are or maybe not smart enough to be here? Her lab mate Marvin, who is the only African American graduate student in the department, confirms for her that what she is experiencing is indeed racism and gender-based oppression. Marvin himself experienced racial oppression in spite of being a senior lab member. But even with Marvin’s solidarity, Amalia feels undervalued and alone. She wonders if maybe she doesn’t belong in engineering after all, or at least not at this lab, in this university.

“I think it’s important to mention to faculty or people who are in power that even if you don’t see these types of challenges or uncomfortable situations in your lab, it doesn’t mean that they don’t exist.” 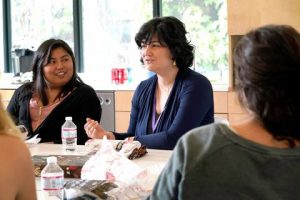 UW ECE Assistant Professor Azadeh Yazdan (center), said she could relate to the Theater for Change UW performance because she had experienced many of the same instances of discrimination and oppression portrayed in the play. She is shown here speaking at the CNT’s Women’s Mentoring Lunch Series.

This performance was derived from real-life experiences shared in focus groups throughout 2018 and 2019 by underrepresented students from the UW, San Diego State University and other CNT partner institutions. During the play, audience members were invited to intervene onstage in ways that would lessen oppression for Amalia and Marvin. After each intervention, the actors and the audience discussed what went well and what could be improved to create better outcomes.

“We were crowd-sourcing solutions to our most pressing social problems,” Moritz said.

As a result of thoughtful work on character backstories, the realness of the performance hit home for audience members like Griggs, who volunteered to intervene in the play as a “spect-actor” on behalf of Amalia. In the play’s intervention, he quickly became enmeshed in a back-and-forth conversation with Jared, Amalia’s and Marvin’s white colleague, which had the unintended effect of ignoring Marvin and shutting Amalia out, resulting in Amalia storming out of the room upset, needing to protect herself.

“I tried to be really affirming, but then it didn’t end up going the way that I expected. I’m so glad there was a safe space right here where I could give [the intervention] a try, and it’s okay if it didn’t go perfectly. Now, I have time to think about it and how I might approach [a similar situation] differently.” 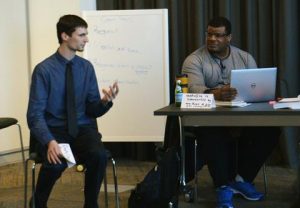 ECE graduate student Devon Griggs (left), was an audience member who volunteered to intervene in this interactive play on behalf of Amalia. As often happens with interventions by “spect-actors” in the audience, the experience didn’t unfold in the way Griggs expected.

Response to the workshop from faculty, students and staff was enthusiastic and positive. Several attendees mentioned how much they appreciated not only having the opportunity to build their awareness and skills, but also how they personally identified with some of the incidents of discrimination and oppression portrayed in the play.

Leadership at both the CNT and Theater for Change UW emphasized that they saw the workshop as a first step toward an ongoing conversation and deeper commitment to equity and inclusion at the CNT and the UW College of Engineering (CoE). The CoE will be sharing the workshop as an online video module and several other university departments across campus are now considering offering similar experiences for their faculty and students.

For faculty and student mentors who were unable to attend this workshop, Theater for Change UW has a straightforward recommendation that can help people begin to recognize when students are experiencing discrimination or instances of oppression.

“Listen carefully to your students. They will tell you exactly what you need to know,” said Debi Talukdar, the workshop’s coordinator and co-facilitator from Theater for Change UW. “Listen to the things they’re saying. Listen to the things they’re not saying, which they’re showing you in other ways. Then, don’t just let it drop there. You’re in a position to create change in a way that students cannot. Use your power to do something, because you can.”

To read this story in its entirety, visit the Center for Neurotechnology website.