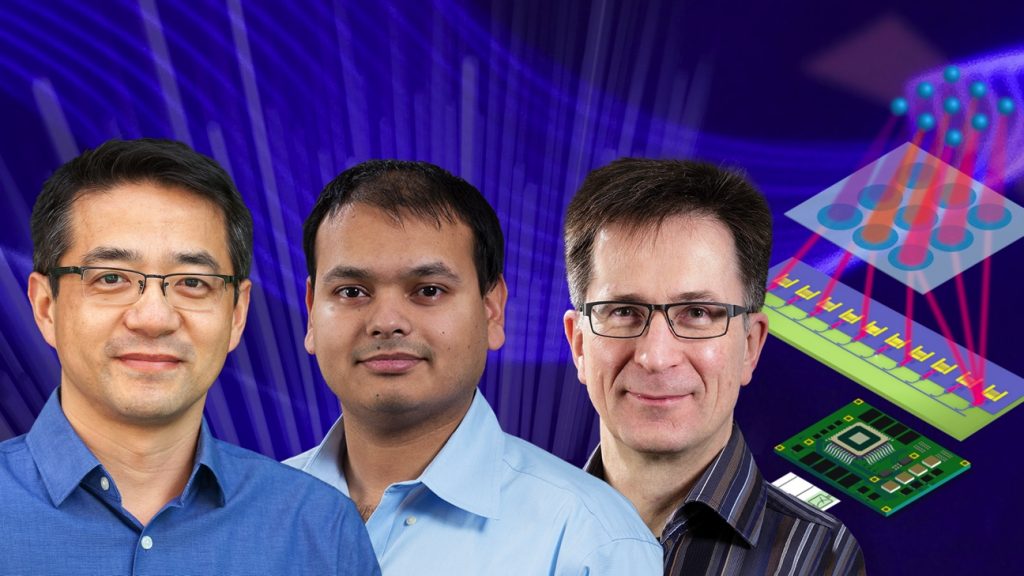 Quantum computers could be a game changer. These devices use principles of quantum mechanics to make huge leaps forward in solving complex and challenging problems that are well beyond the scope of the fastest supercomputer in existence. For example, optimizing complex algorithms involved in weather forecasting, controlling traffic flow and managing airline flight schedules is theoretically within reach of a full-scale quantum computer. Simulating complex chemistry and molecules involved in drug development and electronic materials discovery could also be enabled by quantum computing.

Because of this potential, there is an ongoing, worldwide race to build the first scalable quantum computer. But after several years, the most powerful quantum computer built to date is still well under 300 quantum bits, or ‘qubits.’ To be applicable to problems like what is described above, a quantum computer needs to have the capacity to operate millions of qubits. With this in mind, building a full-scale quantum computer capable of tackling real-world problems is a daunting challenge.

A multi-institutional research team led by UW ECE faculty members Mo Li, Arka Majumdar and Karl Böhringer has recently taken on this challenge by participating in the National Science Foundation’s Convergence Accelerator. The focus of this NSF program is to make timely investments in multidisciplinary research that will deliver tangible solutions improving the lives of millions of people. The NSF Convergence Accelerator is investing $50M to advance 10 out of 29 research teams addressing national-scale societal challenges from phase one to phase two of the program. The UW ECE-led team, part of the program’s 2020 cohort, was selected to move on to phase two as one of four teams focusing on quantum technology.

“The NSF Convergence Accelerator is a uniquely inspiring program, providing us with an experience that teaches us how to pitch our ideas, build a team and conduct user interviews,” said Li, who is lead principal investigator on the research team. “It helps us to have a fresh view of our original plan, moves us to better manage the project, and most importantly, the program helps us discover new directions, new applications, new stakeholders for our technology.”

This research is supported by the NSF Convergence Accelerator, which is investing $50M to advance 10 out of 29 research teams addressing national-scale societal challenges from phase one to phase two of the program. The UW ECE-led team, part of the program’s 2020 cohort, was selected to move on to phase two as one of four teams focusing on quantum technology.

Along with moving into phase two of the program, the research team will receive a $5M, two-year award from the NSF Convergence Accelerator. The award will help the team build on their efforts and achievements from phase one, which were aimed at scaling up the capacity and speed of quantum computers. In phase two, the team will be developing a ‘Photonic Engine Accelerating atomic QUantum Engineering,’ or PEAQUE. The PEAQUE project will address quantum computing scalability by developing a powerful, miniaturized optical control engine that interfaces cold atom qubits with quantum software. The team will also participate in the NSF Convergence Accelerator’s Idea-to-Market curriculum to assist them in further developing solutions and to create a sustainability plan that ensures their efforts will have a positive impact beyond NSF funding.

“Miniaturization is a main theme of PEAQUE, but on top of that, we will make more powerful technology to optically control many qubits. We’re not just shrinking things. We are also using new materials and advanced microwave technology to make this possible,” Li said.

“We are developing a whole system using devices that we prototyped recently using fundamental physical principles,” Majumdar added. “Going from fundamental physics to application in a short period of time is very exciting.”

The PEAQUE project will be a collaboration between academia, industry and government institutions. The research team includes co-investigators Birgitta Whaley, a professor of chemical physics at UC Berkeley and director of the Berkeley Quantum Information & Computing Center, Adam Kauffman, Jun Ye, and Ana Maria Rey from JILA (a joint institute of the University of Colorado Boulder and the National Institute of Standards and Technology), and Ben Bloom and Brian Lester from Atom Computing. Other collaborators include Larry Minjoo Lee from the University of Illinois Urbana-Champaign and Matt Eichenfield from Sandia National Laboratories. 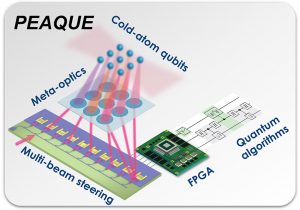 Along with moving into phase two of the program, the research team will receive a $5M, two-year award from the NSF Convergence Accelerator to develop a ‘Photonic Engine Accelerating atomic QUantum Engineering,’ or PEAQUE. The PEAQUE project will address quantum computing scalability by developing a powerful, miniaturized optical control engine that interfaces cold atom qubits with quantum software.

“To build a quantum computer for practical use is an enormous mission to accomplish. It requires solving many challenging technological problems,” Li said. “Scalability is one of the key factors to be able to go beyond a million qubits. Therefore, integrated scalable miniaturized technologies, like PEAQUE, are going to play a critical role.”

The research team is designing PEAQUE to support a 1,000-qubit quantum computer. This may sound like a far cry from a million qubits, but it is a size that can show proof of concept. And according to Li, this is an important milestone between where we are now and quantum computers capable of impacting the real world.

“Using current technology, it is possible to control 100 qubits. The equipment may be the size of a room, but it is doable,” Li said. “But from 100 to 1,000 qubits it is a very big challenge. And even if you manage to do that, how do you go from 1,000 qubits to one million? For that, you’ll need a technological breakthrough in terms of scalability. That is what we are trying to address.”

In order to achieve this miniaturization, one of the main goals of PEAQUE is to reduce the size of the laser beam steering module that is at the core of the optical control system of a cold-atom quantum computer, while at the same time, greatly increase computing capacity and precision. Current laser beam steering modules for quantum computers are roughly the size of a large shoebox, and each module can generate and control 32 laser beams that interact with cold atoms. But at least 2,000 laser beams are needed to support a 1,000-qubit quantum computer. The research team addressed this issue in phase one of the NSF Convergence Accelerator by proposing a chip-scale multi-beam illumination and steering system, or MBIS, which is slated to go into PEAQUE during phase two.

The MBIS in PEAQUE will be over a hundred times smaller than state-of-the-art beam systems, and it will be much more powerful. Instead of emitting only 32 laser beams, each MBIS module will be able to emit and steer 100 beams. Equally important, the MBIS emits its laser beams perpendicular to the plane of the module, as opposed to emitting beams from the edges of the device like current technology. What this means is that multiple MBIS modules can be placed next to each other like tiles in a compact, planar array to steer thousands of laser beams all at the same time. To help picture this, imagine an extremely complex laser light show, but one that is projected onto an array of single atoms.

“This project is taking a revolutionary new idea all the way to a device for practical applications,” Böhringer said, who in addition to being a UW ECE professor and member of the research team is also director of the Institute for Nano-Engineered Systems. “We are building a truly scalable nano-engineered system.” 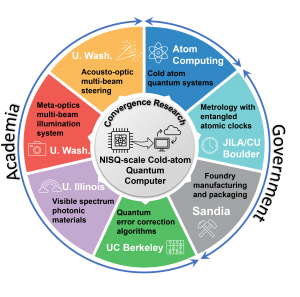 In phase one of the NSF Convergence Accelerator, the research team proposed the MBIS and successfully fabricated prototype devices, which are currently under testing. They developed a full production process flow and built the electronics system for PEAQUE to contain a large array of atoms. The progress made in phase one put the team on a fast track to demonstrate the first prototype of PEAQUE early on in phase two.

The team is planning to establish foundry processes at Sandia National Laboratories to fabricate PEAQUE on eight-inch wafers and mass produce the device. By the end of phase two, the team will deliver a full test kit, including devices, electronics and software, all in one package. They plan to disseminate the test kit and their findings broadly to the academic community and the private sector.

“Quantum research and discovery is a priority for the National Science Foundation. Through the NSF’s Convergence Accelerator, teams like PEAQUE are expediting their solutions forward by integrating a convergence research approach to include a wide range of expertise and partnerships from industry, government, non-profits, academia and other communities of practice,” said Douglas Maughan, head of the NSF Convergence Accelerator program. “Today’s scientific priorities and national-scale societal challenges cannot be solved by a single discipline. Instead, the merging of new ideas, techniques, and approaches, plus the Convergence Accelerator’s innovation curriculum, enables teams to speed their research into application. We are excited to welcome PEAQUE into phase two and to assist them in applying our program’s fundamentals to solving this complex scientific challenge. If successful, PEAQUE’s scalable solution will provide a positive impact on society at large.”

The success of the team’s project will make room-sized quantum experiments fit into a much smaller, rack-mounted system. Ultimately, PEAQUE will help to realize a full-scale quantum computer capable of solving important and challenging problems such as predicting weather patterns more accurately, speeding development of life-saving drugs and discovering entirely new materials to be used in future technologies.

According to Li, PEAQUE will likely find many other important research applications outside of quantum computing as well. Much like the race to put people on the moon spawned new, and unexpected inventions, Li anticipates that the race to build a full-scale quantum computer will do the same.

“The research toward building a quantum computer can spawn many innovations in optics, in control mechanisms, in micro-electro-mechanical systems, in packaging, in semiconductor technology,” Li said. “Many of our needs are new and have never been seen before, so the investment by the NSF in this project and the new model of the Convergence Accelerator program can generate many new and innovative ideas.”