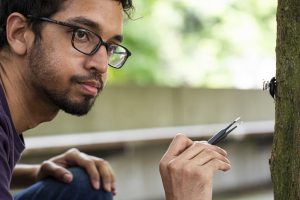 UW ECE alum Vikram Iyer takes inspiration from biological phenomena and transforms them into programmable systems, like Beetlecam (pictured), a wireless vision system that can be mounted on live beetles. Photo by Mark Stone / University of Washington

Adapted from an article by Kristin Osborne, UW CSE

When bees leave the hive, they can spend all day flying and foraging on a single “charge” owing to their ability to convert fats and carbohydrates that store significantly more energy than batteries. When other insects traverse the landscape, the structure of their retinas combined with the motion of their heads enable them to efficiently take in and process visual information. And when dandelions shed their seeds, structural variations ensure that they are dispersed through the air over short and long distances to cover maximum ground.

Recent UW ECE graduate and Allen School professor Vikram Iyer is not a biologist, but he takes inspiration from these and other biological phenomena to engineer programmable systems and devices that can go where computers have been unable to go before — and solve problems more efficiently and safely than previously thought possible. During his time at UW ECE as a Ph.D. student, Iyer imagined how the so-called internet of biological and bio-inspired things could transform domains ranging from agriculture to wildlife conservation. His results recently inspired the Association for Computing Machinery’s Special Interest Group on Mobility of Systems, Users, Data, and Computing to recognize him with the SIGMOBILE Doctoral Dissertation Award for “creative and inspiring work that shows how low-power sensing, computing and communication technologies can be used to emulate naturally-occurring biological capabilities.”

Gollakota and Iyer worked together on a series of projects that gave new meaning to the term “computer bug” — but in this case, they took their lessons from the kind of bugs with legs and wings. For one of their early projects, Living IoT, the team developed a scaled down wireless sensing and communication platform that was light enough to be worn by bumblebees in flight. The tiny sensor backpacks incorporate a rechargeable power source, localization hardware, and backscatter communication to relay data once the bee returns to the hive in a form factor topping out at a mere 102 micrograms. Later, when the northern giant hornet — colloquially referred to as the “murder hornet” — was sighted in northwest Washington, the state’s Department of Agriculture enlisted Iyer’s help in designing and affixing tiny tracking devices onto a live specimen so that agency staff could track it back to the nest.

After seeing their concept of on-board sensors for insects take flight, Iyer and his colleagues came back down to earth to develop a tiny wireless camera inspired by insect vision. Their system, which they dubbed “Beetlecam,” offered a fully wireless, autonomously powered, mechanically steerable vision system that imitates the head motion of insects. By affixing the camera onto a moveable mechanical arm, the team could mimic insect head motion to capture a wide-angle view of the scene and track the movement of objects while expending less energy — and at a higher resolution. The complete vision system, which can be controlled via smartphone, is small enough to mount on the back of a live beetle or insect-sized terrestrial robots such as their own prototype built to demonstrate the capabilities.

Many sensors, including those designed by Iyer and his collaborators, still require a method of transportation, be it beetle, bee, or robot. Iyer and his collaborators wondered if they could design sensors capable of delivering themselves. The answer, to borrow a phrase from singer/songwriter Bob Dylan, was blowing in the wind — in the form of dandelion seeds. Iyer and the team developed a wireless, solar-powered sensing and communication system that can be carried aboard flexible, thin shapes. The shapes are designed to carry the sensors through air and land upright 95% of the time, relying on a structure reminiscent of the bristle-like shape of dandelion seeds — with some necessary modifications to accommodate the weight of the attached sensor. The team also demonstrated that, by modulating the porosity and diameter of the structures, they can ensure the sensors are dispersed at various distances like the seeds.

Unlike many miniaturized systems, Iyer’s flora- and fauna-inspired projects favor designs that rely on off-the-shelf parts instead of requiring custom-built circuits.

“In addition to showing how we can take lessons from nature to advance a new category of bioinspired computing, my work demonstrates how we can use programmable general-purpose components to rapidly develop these novel miniaturized wireless systems,” Iyer explained. “This approach has the potential to exponentially increase innovation in domains such as smart agriculture, biological tracking, microrobots, and implantable devices. My goal is to enable anyone with a computer engineering background to advance miniaturized systems without the need to also develop custom silicon.”

Iyer, who earned his Ph.D. from UW ECE before joining the Allen School faculty last year, previously earned a Paul Baran Young Scholar Award from the Marconi Society and his work was voted Innovation of the Year in the 2021 GeekWire Awards. He is the third student researcher advised by Gollakota to win this award in recent years, following in the footsteps of Allen School alum Rajalakshmi Nandakumar (Ph.D., ‘20), now a faculty member at Cornell University, and ECE alum Vamsi Talla (Ph.D., ‘16), who was co-advised by Allen School and UW ECE professor Joshua Smith and is currently CTO of UW spinout Jeeva Wireless.