Wearable solar power could contribute to a brighter future 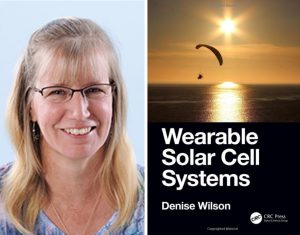 “Wearable Solar Cell Systems,” (right) recently published by Denise Wilson (left) envisions a near-future where you won’t have to worry about charging your cell phone or any other small electronic device.

How do you feel when your cell phone battery dies, and there’s no wall outlet nearby or other convenient way to recharge? Irritated? Maybe even a bit panicked? Well, stay calm and carry on. A new book recently published by Denise Wilson, a professor in the University of Washington Department of Electrical & Computer Engineering, is envisioning a near-future where you won’t have to worry about charging your cell phone or any other small electronic device.

“Wearable Solar Cell Systems” examines the possibilities of using sunlight and artificial light to power small electronic devices such as smartphones, headphones and fitness trackers. Even biomedical devices such as hearing aids and insulin pumps could potentially be powered by this technology. According to Wilson, the book was written to help university students, as well as a general audience, imagine what solar (photovoltaic) cell technology might soon make possible. She also wanted to provide a holistic picture of wearable solar cell energy systems for researchers developing related technologies.

“We’re in a society where people want access to their phones 24 hours a day, seven days a week. Given what people do in their everyday life, we need to consider how to generate that power,” Wilson said. “We already have the ability to convert both artificial light and sunlight into electrical energy in a way that could potentially be wearable and useful to the devices we expect to be carrying around with us. So, I think we’re going to eventually see the end of plugging into the wall outlet. I think that’s coming by consumer demand.” 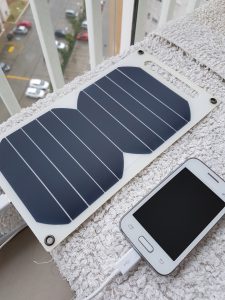 Compact and portable flat-panel solar chargers capable of powering small electronics have already made their way into the marketplace. According to Wilson, advances in technology will soon allow manufacturers to shrink the size of solar energy systems to a wearable footprint.

Wilson’s book considers three possible options for wearable solar cell systems. The first would be to take conventional crystalline silicon solar cells (the type used in rooftop solar panels) and scale them down to a wearable footprint. These types of systems, integrated into backpacks for example, have already made their way into the commercial marketplace. They are fairly efficient at converting light into electrical energy; however, the drawbacks are that they are brittle and not flexible or bendable.

The second option has its foot in the marketplace, but it is not as popular as crystalline silicon. Amorphous silicon solar cells are also present in some rooftop solar panels, and they are cheaper than crystalline silicon cells. Their strength in regard to wearables is that these cells can be produced thin enough to be bent, curving in a single direction. Mounting these curved solar panels to shoulders, the top of a baseball cap, shoes, and so on, could be a real possibility in the near future. These systems would provide plenty of surface area for converting light into electrical energy; however, they are not as efficient as crystalline silicon and their bending-capability only goes one way.

Perhaps most exciting is the third option, which is further down the road in terms of design and development, but provides the most opportunities to integrate seamlessly into our everyday lives. According to Wilson, third-generation solar cell technologies based on materials that use the chemical structure of perovskite, a natural-occurring mineral, are showing great promise in terms of flexibility, energy efficiency and scalability. Quantum-dot, organic and dye-sensitized technologies offer similar benefits in their small size, flexibility and low cost.

These sorts of solar cells are actually small enough and bendable enough to be woven directly into fabric. Imagine wearing a solar shirt that powers your smartphone, or a baseball cap containing fabric fibers that power your fitness tracker. Dream big, and an almost endless variety of applications are conceivable, even beyond wearables. How about a fabric cover that powers your car while it’s sitting in the driveway? Or perhaps large, outdoor fabric tents that power their own heating and lighting systems?

“I think if some of these technologies, like perovskite or organic cells can get over their inherent limitations, you’ll just see an explosion of devices that are powered from these small, bendable solar cell technologies,” Wilson said.

Challenges and the way forward

Exciting as the possibilities may be, there are, as you might expect, some obstacles ahead. The primary challenge Wilson noted for development of wearable solar cell systems is simply marketplace demand.

“First, there has to be a market, and there has to be a convincing market. Our current solar cell industries are driven by putting panels on rooftops. They’re driven by large-scale energy systems,” Wilson said. “The challenges that are involved in taking this technology that has been used to put panels on rooftops and in fields and change it so it’s managed, configured and operated in such a way that’s optimized for portable and wearable systems are fascinating at a research level.”

As Wilson describes it, engineering wearable solar cell systems isn’t as simple as taking a conventional rooftop solar panel and scaling it down to a small size. There are many electrical and power management considerations dependent on hardware, circuits and good analog design that must be addressed. But despite these challenges, the payoff for developing and commercializing these small, wearable systems for multiple applications promises to be huge.

“We have an obligation, because we have such a large talent pool at our University and in our country, to think outside the box in terms of energy harvesting and solving our dependence on fossil fuels,” Wilson said. “I’d love to see us jump forward with that.”

One important example of this technology’s potential impact is that wearable solar cell systems could contribute significantly to a reduction in the need for batteries, and thus our dependence on fossil fuels. This is because the energy these systems generate could be stored in battery alternatives such as supercapacitors. The sheer number of small devices wearable solar cell systems could power throughout the marketplace worldwide would end up displacing a large number of batteries.

“We have an obligation, because we have such a large talent pool at our University and in our country, to think outside the box in terms of energy harvesting and solving our dependence on fossil fuels,” Wilson said. “I’d love to see us jump forward with that.”

So, in addition to meeting individual power consumption needs and providing a seamless user experience, wearable solar cell systems could represent this sort of out-of-the-box thinking. It’s the type of innovation that provides new reasons to believe some of our most challenging environmental problems, not only with fossil fuels but also with runaway battery consumption, could one day be solved. In the forward to Wilson’s book, she captures this idea succinctly.

“This book was dedicated to the hope for the planet that renewables provide, not the least of which is hope itself.”