Adapted from an article by Lia Unrau, UW Bioengineering 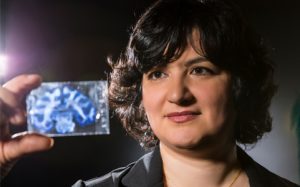 With a promising approach to drive brain repair and recovery following a stroke, UW ECE Assistant Professor Azadeh Yazdan has earned the American Heart Association (AHA) Career Development Award. Yazdan’s neural engineering technologies and new brain stimulation-based therapies have the potential to help restore function and movement in people who have had a stroke – something that happens every 40 seconds in the United States.

“We’re combining novel neural technologies with advanced artificial intelligence and machine learning to precisely stimulate neural activity to rewire the brain,” said Yazdan, the Washington Research Foundation Innovation Assistant Professor of Neuroengineering in the departments of bioengineering and of electrical and computer engineering.

“In the clinical setting, I envision a personalized stimulation protocol designed to help a patient regain lost function, based on the location and degree of the injury,” she said. “This can potentially have a great impact on the outcome of recovery, as each stroke is unique. It can also create paths for therapies for other movement and neural disorders.”

The effects of stroke can be disabling for survivors. They may experience numbness, loss of touch sensations, speech and memory problems, pain, muscle weakness or paralysis. About 70 percent of stroke patients lose the ability to interpret bodily sensations that can affect safety, motor stability and function. However, thanks to the brain’s remarkable ability to learn and adapt, it is possible for the brain to recover after a traumatic injury like stroke.

Researchers can take advantage of the fact that the brain is constantly rewiring, or making new neural connections, as new stimuli come in. Neurons that activate together create a stronger connection, an idea often summed up as, “fire together, wire together,” and known as the Hebbian theory. This pairing is also responsible for “practice makes perfect.” Yazdan’s team designs their stimulation protocols based on this Hebbian theory.

Scientists have used brain stimulation to promote recovery after stroke, but with limited success and understanding of how it works. Newer efforts to forge brain connectivity changes using brain stimulation on a larger scale have been inconsistent and unpredictable when tried in clinical studies.

The three-year, $231,000 AHA award supports Yazdan’s new approach to stimulate effective connectivity across multiple networked regions of the brain. Her project will focus on the loss of bodily sensations following stroke, as there is a lack of treatments for these effects. The team will use its novel modeling and stimulation tools to measure sensory function after a stroke and during recovery.

Need for a personalized approach

The AHA project builds on research she and her team reported May 20 in iScience, which found that the existing structure of a brain’s unique neural architecture influences how the brain rewiring can occur. That means that applying the same patterns of stimulation in one patient is unlikely to have the same effects in another.

“We were surprised to find that the structure of the network, even more than the actual stimulation protocol, determines how the network rewires in response to stimulation,” Yazdan said.

“In the clinical setting, I envision a personalized stimulation protocol designed to help a patient regain lost function, based on the location and degree of the injury. This can potentially have a great impact on the outcome of recovery, as each stroke is unique. It can also create paths for therapies for other movement and neural disorders.”

“Our findings show that the stimulation protocol needs to be tailored to each patient’s brain structure and suggests that to improve the effects of stimulation, our protocols need to be personalized,” Yazdan said.

In the future, she wants to control functional activity in real time using an online controller to treat a host of neural and psychiatric disorders.

Yazdan is a core scientist with the Washington National Primate Research Center, and an investigator with the UW’s Center for Neurotechnology and Weill Neurohub, a research collaboration among UW, University of California (UC), Berkeley, and UC, San Francisco. In 2021, she received a $3.2M, five-year grant from the National Institutes of Health to further advance her work in functional recovery after a stroke. The UW College of Engineering honored her this spring with the 2022 Junior Faculty Award.

About the AHA award: The AHA award helps rising healthcare and academic professionals explore innovative questions and gain the data and training they need for future high-quality career success.