Originating from UW research, Zap Energy is on its way to making sustainable energy from nuclear fusion a practical reality 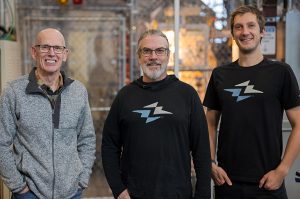 When most people hear the words “nuclear power,” it is nuclear fission that first comes to mind — often represented in the news by pictures of massive, concrete power plants and cooling towers. This type of energy production is capable of producing enormous amounts of electricity from splitting atoms, and it is considered by the U.S. Department of Energy to be a clean, sustainable power source.

However, this method of generating nuclear energy is not without serious downsides. The types of nuclear power plants we are familiar with are expensive to construct and politically difficult to build because of ongoing environmental and public safety concerns. These power plants generate waste that remains highly radioactive for hundreds, or even thousands, of years and must be put into safe storage. Partial plant meltdowns have occurred in places such as Three-Mile Island, Pennsylvania and Fukushima, Japan, seriously damaging surrounding areas, and in some cases, such as Chernobyl in Pripyat, Ukraine, rendering them completely uninhabitable for humans. And as the world has recently been reminded in the Russia-Ukraine conflict, nuclear power plants can become wartime targets.

That is why for decades, scientists and engineers have been working toward developing nuclear fusion, which does not have these downsides and differs from fission in many important ways. The first and perhaps most fundamental difference is that nuclear fission splits heavy elements, such as uranium, into lighter ones to generate energy. Whereas nuclear fusion is a process of combining — or fusing — lighter elements, such as deuterium, into heavier ones. Both processes yield millions of times more energy per mass of fuel than other conventional power sources such as burning coal, oil or gas. But fusion can create almost four times more energy per mass of fuel than fission. Fusion is also carbon-free, produces virtually no radioactivity as compared to fission and it can be generated within a much smaller reactor. Fusion also promises to be an inexpensive form of energy production because its fuel source, hydrogen isotopes, are found in water and are vastly abundant in our world’s oceans.

“We are aiming, through nuclear fusion, to quickly get a non-carbon producing, clean form of electrical energy on the grid, one that has nearly limitless fuel available.” — UW ECE Research Professor Emeritus Brian Nelson, co-founder and chief technology officer of Zap Energy

Now, because of recent advances in technology and the growing threat of climate change, the race is on to make nuclear fusion power a practical reality, and UW spinout Zap Energy is well-positioned to come out ahead. The company, co-founded in 2017 by UW ECE Research Professor Emeritus Brian Nelson, UW Aeronautics & Astronautics Professor Uri Shumlak, and entrepreneurial investor Benj Conway, is in the midst of building an affordable, compact and scalable fusion reactor. Their unique approach promises to be one of the most commercially viable solutions to achieving nuclear fusion power because of technology they developed at the UW in cooperation with researchers at Lawrence Livermore National Laboratory. 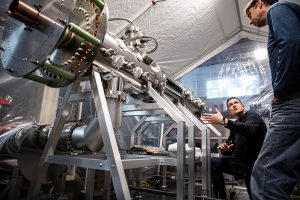 “Our goal is to bring fusion power to the electrical grid,” said Nelson, who is chief technology officer at Zap Energy. “We have a different approach than the mainstream, and I don’t know how you could compete with the simplicity of our reactor. If we are successful, and I think we will be, this promises to offer real hope for humanity, a way to significantly address climate change and replace fossil fuels.”

Zap Energy is working hard toward that goal. The company has offices in Mukilteo and Everett, Washington, where over 80 employees, including UW ECE Professional Master’s Program student Daniel Garratt and UW ECE alumnus Steve Zwaller (BSEE ‘84), are developing reactor prototypes and bringing Nelson’s vision to life.

“I’ve been able to directly apply what I’ve learned in every class I’ve taken so far at UW ECE to my work here,” said Garratt, who is a high-voltage research engineer for Zap Energy. “I think nuclear fusion is going to be the sort of thing people won’t notice changing their lives until it has already done so. But it will have an undeniably positive effect on people’s lives and the planet.”

“The potential of what this could do for the world motivated me. I read about what the company was doing, and it was a no-brainer. I decided to join,” added Zwaller, a senior facilities manager at Zap Energy who postponed his retirement so he could become part of the startup. “I’m really into sustainability. Knowing that we’re going to come up with a low or carbon-free power source, that did it for me.” 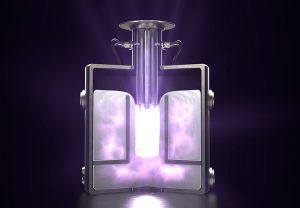 An artist’s rendering of the fusion reaction that takes place within Zap Energy’s FuZE-Q reactor. This device uses pulses of electrical current traveling along a central column, which creates a strong magnetic field that confines, compresses and heats plasma to the point of generating fusion. Illustration courtesy of Zap Energy

A nuclear fusion reactor mimics natural processes in stars like our sun, where gravity fuses together hydrogen atoms to create helium, producing light and generating enormous amounts of energy. Engineering fusion has been likened by some to ‘creating a star in a bottle.’ Huge amounts of heat and pressure are involved, and therein lies one of the key reasons why nuclear fusion has proven to be so challenging for scientists and engineers to produce. Generating sustained fusion reactions in a system that creates more energy than it requires to operate, and capturing that energy in an efficient way, has proven over the years to be confoundingly difficult.

The two main approaches to nuclear fusion today either use magnetic fields to confine and compress a plasma gas to the point where fusion occurs or use lasers to heat hydrogen isotopes in a contained environment, generating shock waves that trigger fusion. A number of huge devices and facilities have been built to this end, such as the ITER tokamak in southern France and the National Ignition Facility in Livermore, California, but as of yet, none have been able to generate more power than what was required to create the fusion reaction itself.

Zap Energy is taking a different approach. Rather than using large magnets or lasers, they have developed a compact device that uses pulses of electrical current traveling along a central column. This creates a strong magnetic field that confines, compresses and heats plasma to the point of generating fusion. In engineering, this method is considered a “Z-pinch” because the electrical current pinches the plasma along the Z axis of a normal, three-dimensional graph. A Z-pinch plasma flow is prone to instability, but the device compensates for that by producing a plasma flow that varies across the column radius — an approach Zap Energy calls “sheared-flow stabilization.” It’s akin to traveling in the middle lane on the freeway and being unable to change lanes because of cars zooming past on both sides.

“Z-pinch has long been an appealing way to achieve nuclear fusion, but for many years researchers considered Z-pinch’s plasma instabilities to be an insurmountable challenge,” said Shumlak, Zap Energy’s chief science officer, in a June 2022 press release. “We’ve shown through both simulation and experiment that sheared flows can stabilize fusion plasmas, and that the stability should extend to a commercially viable scale.”

This unique approach keeps plasma compressed and fusion reactions confined for longer periods of time than previous Z-pinch models have been able to achieve. And that puts what scientists and engineers call ‘scientific breakeven’ — where energy input equals the device’s energy output — within reach for the company. Achieving breakeven, both scientifically and from an engineering standpoint, will be key for Zap Energy to realize its vision of bringing fusion power to the electrical grid.

An illustration showing the inner workings of Zap Energy’s FuZE-Q reactor. Deuterium gas is injected into the acceleration region of the reactor, where electrodes pulse, removing electrons from the deuterium atoms. This creates a plasma, which picks up speed as it moves into the far end of the column (right) where the electrical current generates a strong, stable magnetic field that confines, compresses and heats the plasma — using a method known as a Z-pinch — to the point of generating fusion. Illustration courtesy of Zap Energy

The company’s new Fusion Z-pinch Experimental reactor prototype, known as FuZE-Q, is currently under development to bring Zap Energy closer to that breakeven goal. This new system is being optimized for the high levels of electrical current needed to reach the equivalent of scientific breakeven. The company estimates that it will need to produce 650kA (kiloamperes) of electrical current to achieve this. Last year, they reached 500kA, which was a big accomplishment, and the limit of their hardware capabilities at the time.

“FuZE-Q is the fourth generation of Z-pinch device that we’ve built and is undoubtedly the most ambitious,” Nelson noted in the company’s recent press release. “We designed it to be versatile, resilient and tunable in lots of ways that will be critical as we ramp to higher currents, temperatures and densities.

Looking forward, one of the most important goals for the company will be to confirm through experiments and demonstrations that their Z-pinch technology remains stable as it is subjected to higher amounts of electrical current. Nelson said that he is confident their equipment will meet that test and confirm simulations that predict the plasma will maintain its stability. Then, the next step after achieving scientific breakeven will be to build another reactor capable of surpassing engineering breakeven, where the power generated by the device substantially exceeds what is needed to produce the fusion reaction. If things go as planned, the company aspires to reach that goal by 2026.

“We are aiming, through nuclear fusion, to quickly get a non-carbon producing, clean form of electrical energy on the grid, one that has nearly limitless fuel available,” Nelson said. “The economic and environmental benefits will be huge, and because fuel is virtually limitless and easy to access, fusion holds the potential to reduce political strife between nations. It could even power space travel someday. Our device is compact, scalable and mass-producible. With those things in mind, nuclear fusion is a realistic hope for humanity, and I believe it is the future.”