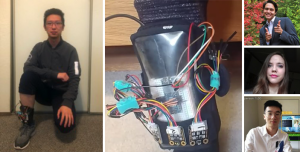 Tian Wang (left) is shown wearing a device he and his classmates (right [top to bottom] Samuel Broadwell, Katriel Looney and Kenny Lu) designed and engineered in the Neural Engineering Tech Studio. The team’s prototype, Haptic Vision, could replace navigation canes for people who are visually-impaired.

When the University of Washington (UW) moved all courses online last quarter in response to the novel coronavirus pandemic, instructors across campus were faced with an immediate challenge — how to quickly re-purpose lectures, lessons and experiences designed for in-person classes into something that would work well for students in an online, virtual learning environment.

This challenge was particularly acute for courses designed to give students hands-on experience, such as the Neural Engineering Tech Studio, a cross-disciplinary course in the UW Department of Electrical & Computer Engineering (UW ECE) and UW Bioengineering, facilitated by the Center for Neurotechnology (CNT) and taught by UW ECE faculty members Chet Moritz, Azadeh Yazdan, and instructor Scott Ransom. They were assisted by Lars Crawford, a UW Bioengineering graduate student and co-founder of MultiModal Health, a startup company that grew out of an idea Crawford and his classmates developed in an earlier version of the course. Crawford noted the difficulty of moving a curriculum online that was traditionally taught in-person.

“I’m a very hands-on learner myself, so I benefited directly from the structure of this course when I was a student,” Crawford said. “There’s a level of camaraderie and rhythm that occurs when you and your partners are all working at the same table with your sleeves rolled up that is difficult to emulate purely through a screen.”

Also, in prior years the course had been supported by CNT industry affiliates, who provided students with supplies, tools and equipment such as 3D printers and laser-cutters used for building engineering prototypes. But because of the pandemic, companies simply didn’t have the capacity to provide the same level of support, and students weren’t able to physically access the equipment like they had in the past. Instructors had to be creative in regard to facilitating class discussions, using Zoom breakout rooms to provide a virtual space for students to connect with each other and checking-in periodically with each student team online to gauge and assist with student progress.

“We were faced with a lot of challenges, and the teaching team was meeting for several hours a week to discuss how to implement different classes and aspects of the course online,” Yazdan said. “A lot of the class activities that are so trivial to do in-person required hours of careful discussions and Zoom tests to evaluate before class.”

Despite these obstacles, students in this team-oriented, 10-week Spring quarter class not only coped with the new learning environment, they flourished in it. Working together online in groups of four or five, the students designed and engineered device prototypes aimed at assisting people with a wide range of neurological conditions, such as paralysis, autism, blindness and Parkinson’s disease.

“The technology the students came up with was amazing, especially what they were able to do while physical distancing, not being able to be near their team members,” Moritz said. “I was so impressed by their final presentations. It was clear that a lot of thought went into their virtual demonstrations, and it was brilliant work.”

How the course functions

The Neural Engineering Tech Studio is designed to help teach students entrepreneurship skills, as well as a patient-centric thought process. Instructors teach students how to better connect, engage and collaborate with each other, and students learn from biomedical industry leaders. In fact, an unexpected benefit to bringing the class online this year was that the instructors were able to connect students with industry leaders around the country such as Nick Terrafranca at GTX Medical and Erika Ross at Abbott Neuromodulation. Students were also encouraged to talk with potential end-users and physicians as they developed their prototypes to ensure what they built aligned strongly with real-world needs.

“Taking a customer focus perspective in design development and thinking about the patient at the core of technology development is a relatively new thing,” Ransom said. “We want to develop a generation of engineers who instinctively put the patient and end-user’s needs at the center of their work.”

The course itself is set-up as a competition. Students are divided into five teams, and each group is responsible for coming up with an engineering prototype that uses neural engineering principles to address health issues. The teams iterate their creations throughout the course, culminating in presentations of their final prototypes to a panel of academic and industry experts. Projects are judged on technical and scientific merit, as well as how easy the prototype is to use and any ethical considerations the invention may generate.

The winning team receives five free hours of consultation with the Washington Entrepreneurial Research Evaluation and Commercialization Hub (WE-REACH), as well as mentorship and support from the CNT geared toward shaping the team’s prototype and winning idea into a real-world startup. Last year’s winning team, PanicAway, engineered a smartphone app designed to help users mitigate the symptoms of a panic attack. The team was featured in GeekWire, New Day Northwest and recently received a $50K grant from the National Science Foundation to further develop their idea.

This year’s winning team was made up of students from UW ECE, UW Bioengineering and UW Chemical Engineering. Samuel Broadwell, Katriel Looney, Kenny Lu and Tian Wang’s winning prototype, Haptic Vision, was designed to replace canes for those who are visually-impaired, and it provided a unique way to help people navigate their surroundings. Creation of the device was inspired by a broader idea.

“I was walking down the street one day, and I saw a blind person walking toward me, using a navigation cane,” Broadwell said. “At that moment, I came up with the idea of developing a full-body suit that could give haptic [touch-sensitive, felt] feedback all over a person’s body, based on proximity of an obstacle to part of the suit, kind of like Spiderman’s “spidey-sense.” Obviously, that was overkill, but it was the start of Haptic Vision.”

Haptic Vision discreetly wraps around the user’s ankle like a sweatband, and it can detect and identify objects that may be ahead of the user’s walking path. Using adjustable auditory feedback, Haptic Vision lets the user know what’s up ahead — for example, “There is a chair to your left, and a television in front of you.” — and when the device comes close to an object blocking the user’s path, it buzzes and vibrates, providing immediate haptic feedback through the user’s ankle. The team envisions future versions of the device where it could be embedded in a person’s shoes and provide information as to how far away objects are from the user.

“The Neural Engineering Tech Studio is a fantastic class and a wonderful learning experience,” Broadwell said. “It was amazing being able to flex our creative muscles and really create something from nothing, especially with all the help and support that the instructors and expert consultants provided.”

Other prototypes developed and demonstrated by class participants were: 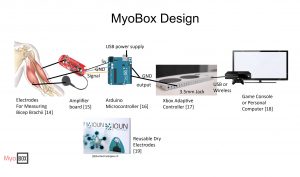 This video game controller facilitates at-home physical therapy for people impacted by peripheral nerve injury, stroke and limb amputation. By gamifying physical therapy, the team hopes to encourage better adherence to physical therapy regimens, making the process more enjoyable and less tedious for the user. The controller uses adjustable electromyographic (EMG) sensors placed on the surface of the skin to read electrical signals from the muscles. These signals are then sent through an amplifier board, Arduino microcontroller and Xbox Adaptive Controller to a game console or personal computer, allowing the user to play the video game by performing their physical therapy exercises. 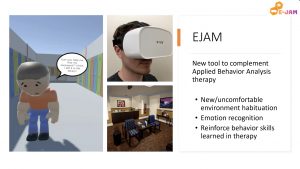 E-Jam is a device designed for use in clinical and school settings. It combines virtual reality and eye-tracking technologies to objectively measure a patient’s progress dealing with autism, a developmental disorder affecting communication and behavior. Through virtual reality, E-Jam creates a realistic, but controlled and safe environment for the user. While in the virtual world, the user is given opportunities to learn how to become comfortable with unfamiliar environments, build social and communication skills, and practice interpreting what characters in the virtual world are feeling. Eye tracking records what objects are being looked at and for how long. This helps identify what the user is focusing on and avoiding, which is feedback that can be used to help adjust therapy and further improve a patient’s coping skills. 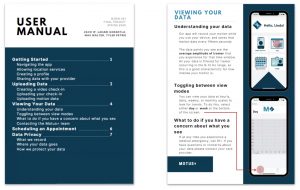 This smartphone app continuously collects data on tremors caused by Parkinson’s disease anytime the patient uses the phone. Data is uploaded automatically to the doctor’s office. The app takes advantage of technology that already exists within the smartphone, such as the camera, accelerometer and microphone, to measure tremors. Continuous monitoring like this gives care providers a quantitative data set that doesn’t rely on a patient’s recollection, enabling more informed decisions when it comes to developing treatment plans. 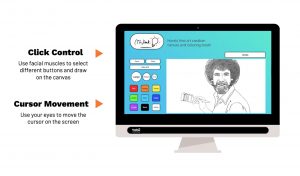 This is an easy-to-use, hands-free art therapy tool for people with limited to no upper limb function, such as those impacted by spinal cord injury and limb amputation. The interface consists of a virtual canvas and “pen.” It uses an eye-tracking device and electrodes placed on the face to enable the user to control the pen with their eyes and facial muscles. Over two million people in the U.S. are currently experiencing limited to no upper limb function, which oftentimes leads to depression and other mental health disorders. The process of creating art through a device like this can help the patient gain a greater sense of control, which leads to improved mental and physical health.

After the course is over, all students have the option of taking their prototype further along the path toward becoming a real-world product. Not everyone exercises this option, but for those who do, support is available through the CNT, whether or not the student was a member of the winning team.

“We’re happy to work with any student or team that wants to take their ideas forward to commercialization,” said Moritz, who is also co-director of the CNT.

Regardless of which career path students choose after the course is over, the skills they gained, including this year’s unique experience of learning how to work with others in online teams, will likely prove invaluable. According to Ransom, most students who took the course will eventually become engineers.

“People often see this as just a prototyping course, but it’s significantly more than that,” Ransom said. “It’s about understanding what people really need from an engineering solution and practice in discovering those needs and infusing them into a design. It’s about adopting an entrepreneurial perspective in developing a product and identifying and leveraging your skills in order to collaborate effectively with your team and others in completing that project. It’s about networking with industry and medical professionals in ways that not only make your project better but also position you for success in your future career. It’s about equipping UW engineers to make significant impacts in the world.”