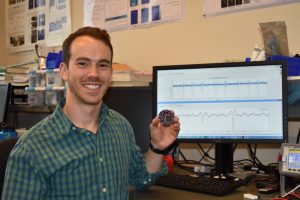 Yang Research Award recipient James Rosenthal holds a NeuroDisc prototype, which he developed at UW ECE in the lab of Professor Matt Reynolds. The NeuroDisc is a low-power wireless brain-computer interface intended for use in electrophysiology experiments. Photo courtesy of Matt Reynolds

UW ECE congratulates recent graduate James Rosenthal, who was named as the 2021 Yang Research Award recipient for his work developing neurotechnology. Rosenthal received his master’s and doctoral degrees from UW ECE in 2018 and 2021, respectively. He is currently a Marie Curie Postdoctoral Fellow with the Laboratory for Soft Bioelectronic Interfaces at the Ecole Polytechnique Fédérale de Lausanne in Geneva, Switzerland.

Rosenthal completed his doctoral degree at UW ECE as a National Science Graduate Research Fellow, and he was advised by UW ECE Associate Professor Matt Reynolds. Rosenthal’s research focuses on the development of wireless brain-computer interfaces. He explores how architectural innovation in embedded systems can reduce the size, weight and power consumption of wireless systems, which in turn can enable new methods for monitoring and treating neurological disorders.

“I am extremely honored to be this year’s recipient,” Rosenthal stated in his acknowledgement of the award. “There are many uncertainties throughout a doctoral program, and it is often easy to question the impact of one’s research. To be selected for this award by leading faculty from our department brings me a lot of confidence as I seek to continue my career in research as a professor.”

The purpose of the Yang Research Award is to recognize and encourage outstanding doctoral student research contributions to the field of electrical engineering. The award goes to one qualifying student per year and is open to all doctoral degree candidates in UW ECE. Receiving the award is considered a high honor and helps to create career opportunities for the recipient.

Rosenthal is passionate about teaching, outreach and mentoring. He was the instructor of record for EE417–Wireless Communications in 2020 and 2021, and he was a teaching assistant for over six academic quarters at UW ECE. He served as UW ECE Graduate Student Association co-chair from 2017 to 2018, and he also served as one of two UW ECE graduate and professional student senators for the University from 2018 to 2020. Rosenthal also co-hosted a scientific communication podcast, “The Paperboys,” with fellow UW graduate student Charlie Kelly. Each episode, Rosenthal and Kelly read and discussed the research papers behind headline science news.

“James is one of the very top Ph.D. students to have graduated from UW ECE in the last several years,” Reynolds said. “In addition to his many strengths in research, he was an outstanding mentor to the other students working in my lab, and he is also an excellent teacher.”

The Yang Research Award was established by successful entrepreneur and former UW ECE faculty member Andrew T. Yang, who spoke at the UW ECE Graduation Celebration in 2012. Yang has been one of the most influential people in the electronic design automation industry for nearly three decades, and he is known for being a visionary in both research and entrepreneurship. When creating the award, Yang stated that he received a similar award when he was a doctoral student and that the recognition gave him the confidence and motivation he needed to continue his promising career in electrical engineering research.

Rosenthal has been engaged in groundbreaking research at the doctoral and postdoctoral stages of his academic career. In addition to expressing gratitude for the award, he noted the supportive environment he found at the University of Washington.

“The University of Washington offered a unique, interdisciplinary environment to explore my research that would have been difficult to find anywhere else,” Rosenthal stated. “The emphasis on collaborative research, particularly through the Center for Neurotechnology, offered me the opportunity to work alongside leaders in wireless electronics, neuroscience and translational medicine.”