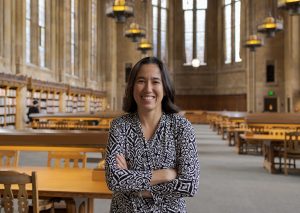 Kai-Mei Fu in the Suzzallo Reading Room on the UW campus. Fu is the Virginia and Prentice Bloedel Professor of Physics and Electrical and Computer Engineering at the University of Washington. Photo by Ryan Hoover | UW ECE

UW ECE Professor Kai-Mei Fu was recently named a 2023 Optica Fellow for outstanding contributions to optics and photonics — the study of the fundamental properties of light and harnessing this knowledge in practical application. Fu received the honor for leading advances in characterization, synthesis, control and device integration of optically-active quantum point defects in crystals. These quantum point defects can be integrated into solid-state devices and used to store and transmit information in quantum computing and networking applications.

Optica, formerly known as the Optical Society of America, or OSA, grants the honor of becoming an Optica Fellow to those who have achieved significant scientific accomplishment in the advancement of optics and photonics. The bylaws of this society allow only 10% of its membership to be designated as an Optica Fellow, and the number elected each year is limited to approximately 0.5% of the previous year’s membership total. Fu joins UW ECE colleagues Professors Mo Li and Lih Lin, who each received the honor in 2021 and 2019, respectively.

“Optica has been a society that has supported and enriched both my research and career since my graduate student days,” Fu said. “I have been excited to have the opportunity to give back to Optica over the past years, either in helping to organize conferences or serving as an associate editor of the journal Optica. Now, I am honored to be recognized for my research contributions as an Optica Fellow.”

Fu is the Virginia and Prentice Bloedel Professor of Physics and Electrical and Computer Engineering at the University of Washington and holds a joint appointment with the Pacific Northwest National Laboratory. Fu received their doctoral degree in applied physics in 2007 from Stanford University. At the UW, and as noted by Optica, their research focuses on the synthesis, characterization and control of optically-active quantum defects in crystals, which has a wide array of applications in quantum computing, quantum networks and sensing technologies.

Fu directs the Quantum Defect Laboratory at the UW, is the director of the University’s NSF National Research Training program: Accelerating Quantum-Enabled Technologies and is co-chair of the University’s interdisciplinary QuantumX Steering Committee. They are also the deputy director of the U.S. Department of Energy’s National Quantum Initiative Co-design Center for Quantum Advantage. Among other notable accomplishments, Fu has been instrumental in leading the establishment of the new UW Graduate Certificate in Quantum Information Science and Engineering at the University. Over the years, Fu has received numerous awards for their work in research and education, including an NSF CAREER Award, a Cottrell Scholar Award and a UW College of Engineering Junior Faculty Award.

“We are fortunate to have Kai-Mei in our Department as a faculty member who is widely recognized as an exceptional leader in their field and across the University,” said UW ECE Professor and Chair Eric Klavins. “Their contributions to research and education have been outstanding and continue to be key to the UW positioning itself as a regional, national and world leader in quantum information science and engineering. I expect that Kai Mei will continue to impress us all with their leadership skills and remarkable achievements well into the future.”

More information about Professor Kai-Mei Fu can be found on their UW ECE bio page.