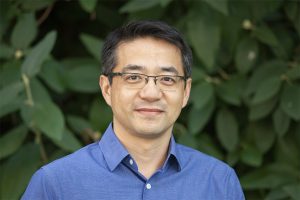 UW ECE Professor Mo Li recently received the honor of being named an Optica Fellow for his leading contributions to the fields of optics and photonics. Li is also a professor in the UW Department of Physics and a member of the Institute for Nano-Engineered Systems at the UW. Photo by Ryan Hoover

On November 2, UW ECE Professor Mo Li received the honor of being named an Optica Fellow for his leading contributions to nanophotonics, optomechanics and integrated acousto-optics. Li’s pioneering research has been foundational to development of integrated nano-optomechanical systems, which enable novel ways of controlling light and interaction with materials using mechanical principles and light forces. His work developing integrated acousto-optics revealed and exploited the interaction between light and sound waves in nanophotonic systems, and he has also made important contributions to 2D material optoelectronics.

Optica, formerly known as the Optical Society of America, or OSA, grants the honor of becoming an Optica Fellow to those who have achieved significant scientific accomplishment in the advancement of optics and photonics. The bylaws of this society allow only 10% of its membership to be designated as an Optica Fellow, and the number elected each year is limited to approximately 0.5% of the previous year’s membership total. Li joins his UW ECE colleague, Professor Lih Lin, who herself received the honor in 2019.

“I am honored to be named as a Fellow of Optica, the society I have benefited tremendously from since I was a student,” Li said.

Li, who is also a professor in the UW Department of Physics and a member of the Institute for Nano-Engineered Systems, has been making significant contributions to the fields of optics and photonics since he obtained his doctoral degree from Caltech in 2007. Since then, he has published more than 80 papers and been awarded six patents. He has been a member of Optica since 2007, and his distinctions include an Air Force Office of Scientific Research (AFOSR) Young Investigator Award; a National Science Foundation (NSF) CAREER award; and a McKnight Land-Grant Professorship and Borja Career Development Award from the University of Minnesota.

Li’s postdoctoral work at Yale University from 2008 to 2010 helped to lay the foundation for the study of optical forces and optomechanical interactions in integrated photonics. In 2010, he began his independent research career as an assistant professor of electrical and computer engineering at the University of Minnesota, and in 2015, he was promoted to associate professor. While at the University of Minnesota, he continued his research in optomechanics and made leading contributions in many other areas of photonics, including 2D materials optoelectronics, mid-infrared photonics, optical spintronics and photonic sensors.

Since joining the UW in 2018, Li has continued to branch out and build upon his previous work. In addition to leading the Laboratory of Photonic Devices at the UW, he is involved with cutting-edge quantum computing research and is a member of the steering committee for the Quantum X Initiative at the UW. His research collaborations at the University have included development of integrated photonic systems for powering quantum computing, creation of integrated photonics for optical computing and acceleration of artificial intelligence and machine learning. His research interests continue to span a wide range of technical areas related to optics and integrated photonics.

“We are very fortunate to have Mo as a faculty member,” said UW ECE Professor and Chair Eric Klavins. “His contributions to the field of photonics have been groundbreaking, and what’s exciting is that he is still moving into new research areas. His work is foundational to UW ECE’s efforts developing quantum computing systems and our strong footprint in that area. I expect to see many more advancements result from his work, not only in optics and photonics, but also in areas these fields support such as quantum computing.”

More information about Mo Li and his research can be found on his UW ECE bio page.