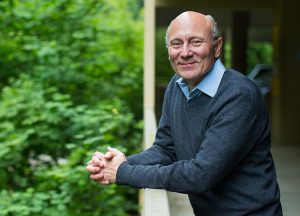 Henrique (Rico) Malvar, a distinguished engineer at Microsoft and UW ECE affiliate professor, is widely recognized as a research and industry leader known for his work in signal processing and data compression. He has served as a key connection between UW ECE and its industry affiliates and supported the Department philanthropically for many years. According to those who have worked with Malvar, his many accomplishments stem in part from his unique ability to lead teams, form long-lasting partnerships and leverage collaborations with others to the benefit of all. Malvar has remarked that he sees empathy for others as foundational to his strong interpersonal and collaborative skills. Photo by Dan DeLong, courtesy of Microsoft

There are not many people who have had career success comparable to what Henrique (Rico) Malvar has achieved. Malvar, a distinguished engineer at Microsoft, has worked for the company for almost 25 years and has held prominent roles throughout his tenure such as chief scientist for Microsoft Research and managing director for Microsoft Research Redmond. He holds over 120 U.S. patents as inventor or co-inventor and has over 170 technical articles to his name. He is a member of the U.S. National Academy of Engineering, the Washington State Academy of Sciences, the Brazilian National Academy of Engineering and the Brazilian Academy of Sciences. He is also an IEEE Fellow and has received many awards throughout his career, including a Technical Achievement Award from the IEEE Signal Processing Society and the 20th Century Landmark Award from the IEEE Seattle Section.

At UW ECE, Malvar has been an affiliate professor since 1999 and has acted as a pillar of support for the Department, serving as a key connection between UW ECE and its industry affiliates. His mentorship and guidance have proven to be invaluable. In addition to his philanthropic gifts to UW ECE over the years, Malvar served as chair of UW ECE’s Advisory Board from 2012 to 2016 and was on the UW College of Engineering’s Dean’s Visiting Committee from 2016 to 2019. In 2018, he played a leading role in helping UW ECE to update its identity and change its name to better reflect the breadth of the Department. Malvar was also chosen to be guest speaker for the 2021 UW ECE graduation ceremony.

How has Malvar achieved this remarkable level of success and philanthropic involvement and maintained it over such a long period of time? According to many who have worked with him, Malvar’s accomplishments stem in part from his unique ability to lead teams, form long-lasting partnerships and leverage collaborations with others to the benefit of all. 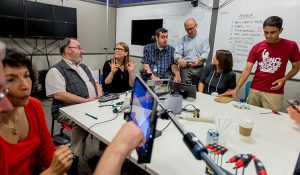 Malvar leads the Enable research group at Microsoft, which seeks to empower people with disabilities and improve their lives through developing new technologies such as eye-controlled and sound-based user interfaces. Here, Malvar is shown with members of his team in the Enable lab, discussing work on eye-tracking technologies, which ultimately led to the development (in partnership with the Microsoft Windows team) of the Eye Control interface for the Windows operating system. Photo by Dan DeLong, courtesy of Microsoft.

“Rico is an exceptional industry leader who has the ability to bring disparate groups of people together to accomplish daunting tasks. UW ECE is very fortunate to be beneficiaries of his involvement with and support of the Department,” UW ECE Professor and Chair Eric Klavins said. “He contributes not only through philanthropic giving and as a key connection between the Department and Microsoft, but also as a strong voice for expanding diversity, inclusion and accessibility in engineering”

Malvar has worked throughout his career toward making technologies more accessible, inclusive and aimed toward social good. He currently leads the Enable research group at Microsoft, which seeks to empower people with disabilities and improve their lives through developing new technologies such as eye-controlled and sound-based user interfaces. The work at Enable requires learning how to understand the world through different perspectives, and Malvar is an advocate for bringing diverse points of view to engineering. He has remarked that he sees empathy (the ability to understand and share the feelings of another) as foundational to his strong interpersonal and collaborative skills.

“I try to exercise empathy in all my daily interactions with people. People perceive and appreciate when you sincerely care about what they think and listen to their opinions,” Malvar said. “The goal is not simply to be nice to people — although that’s a good byproduct — the goal is to learn from them and foster deeper collaborations. That, in turn, leads to better negotiations, better projects and better outcomes.”

A path that led to UW ECE 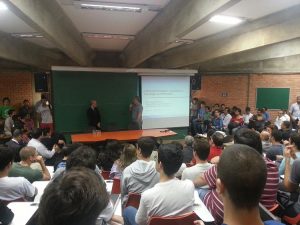 Malvar giving a talk in 2013 to a standing-room only crowd in the auditorium of the electrical engineering department at the Universidade de Brasília. Photo courtesy of Rico Malvar

Malvar was born and raised in the suburbs of Rio de Janeiro, Brazil, and when he was in junior high school, the family moved to Brasília, the capital of Brazil. Both of his parents were college professors, and they instilled in him early on the value of education. Malvar was a natural engineer — a self-described ‘nerd’ who frequently dabbled with electronic kits as a child — and with the support of his parents and many good instructors along the way, he eventually achieved a bachelor’s degree in electrical engineering from the Universidade de Brasília and a master’s degree in electrical engineering from the Universidade Federal do Rio de Janeiro. After receiving his master’s degree, he secured a teaching position at the Universidade de Brasília and soon after took a leave of absence to move himself, his wife and their young daughter to the U.S., where he obtained a doctorate in electrical engineering and computer science from the Research Laboratory of Electronics at MIT. A four-year scholarship made the pursuit of a doctoral degree possible for Malvar, and the experience contributed to his sense of social responsibility.

“There was no way my family would have been able to pay for the tuition at MIT,” Malvar said. “A scholarship from the Brazilian National Council for Scientific and Technological Development made a difference in my life, and it led to a successful career. So, I felt a sense of responsibility for giving back.”

After receiving his doctoral degree, he returned to Brazil where he continued to teach in the engineering department at the Universidade de Brasília for several years. He enjoyed academic life, and eventually he went on to become the head of the department’s graduate program and its digital signal processing research group.

Education had opened many opportunities for Malvar, so after 14 years of teaching in Brazil, he left his professorship and moved his family to the U.S. again. This time they moved to Andover, Massachusetts, so Malvar could take a position as vice president of research and advanced technology at PictureTel (later acquired by Poly). He worked at PictureTel for four years, until the summer of 1997, when he received a unique opportunity to lead the signal processing research group at Microsoft Research in Seattle.

“I am forever grateful to my wife and children for supporting our move to another country, changing schools and moving across the U.S., each time having to rebuild a new network of friends,” Malvar said.

In Seattle, Malvar and his family made a successful new start in a welcoming community. And at Microsoft, Malvar found a company that mirrored his research, career and personal interests as well as the value he placed on developing technology for social good.

“I’ve been working for almost 45 years, and nearly 25 of those years were at Microsoft,” Malvar said. “I would have never expected to be in one place for that long, but yeah, it happened. It’s always better when you are in an environment where your employer has values that you share. That alignment is a good thing.” 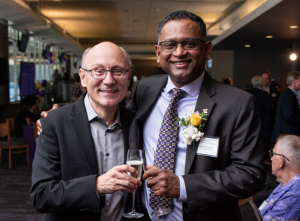 Malvar with UW ECE Professor Radha Poovendran at a 2018 social event. Malvar worked with Poovendran, who was Department chair from 2015 to 2020, to help UW ECE update its identity and change its name in 2018 to better reflect the breadth of the Department.

It was also shortly after he started at Microsoft that Malvar became involved with UW ECE through Professor Les Atlas, a longtime friend and colleague in signal processing research. Malvar found engagement with the Department rewarding, and he wanted to become more involved, so two years later he became a UW ECE affiliate professor.

“I like the academic environment, I like students, I like talking to professors and I like people who think really freely,” Malvar said. “Becoming an affiliate professor gave me the opportunity to have a little bit of the academic involvement that I’ve always enjoyed.”

Today, Malvar continues to remain actively involved and engaged with the Department, and he is currently advising UW ECE on reputation-building initiatives. Looking ahead, he said that over the next few years he would like to spend more time with his family, but he also said that he looks forward to continuing his engagement with UW ECE.

“It’s very clear that education makes a huge difference in people’s lives,” Malvar said. “I’m not sure exactly what the future is going to bring, but if at all possible, I would like that future to include my involvement with the UW and with UW ECE in particular.”